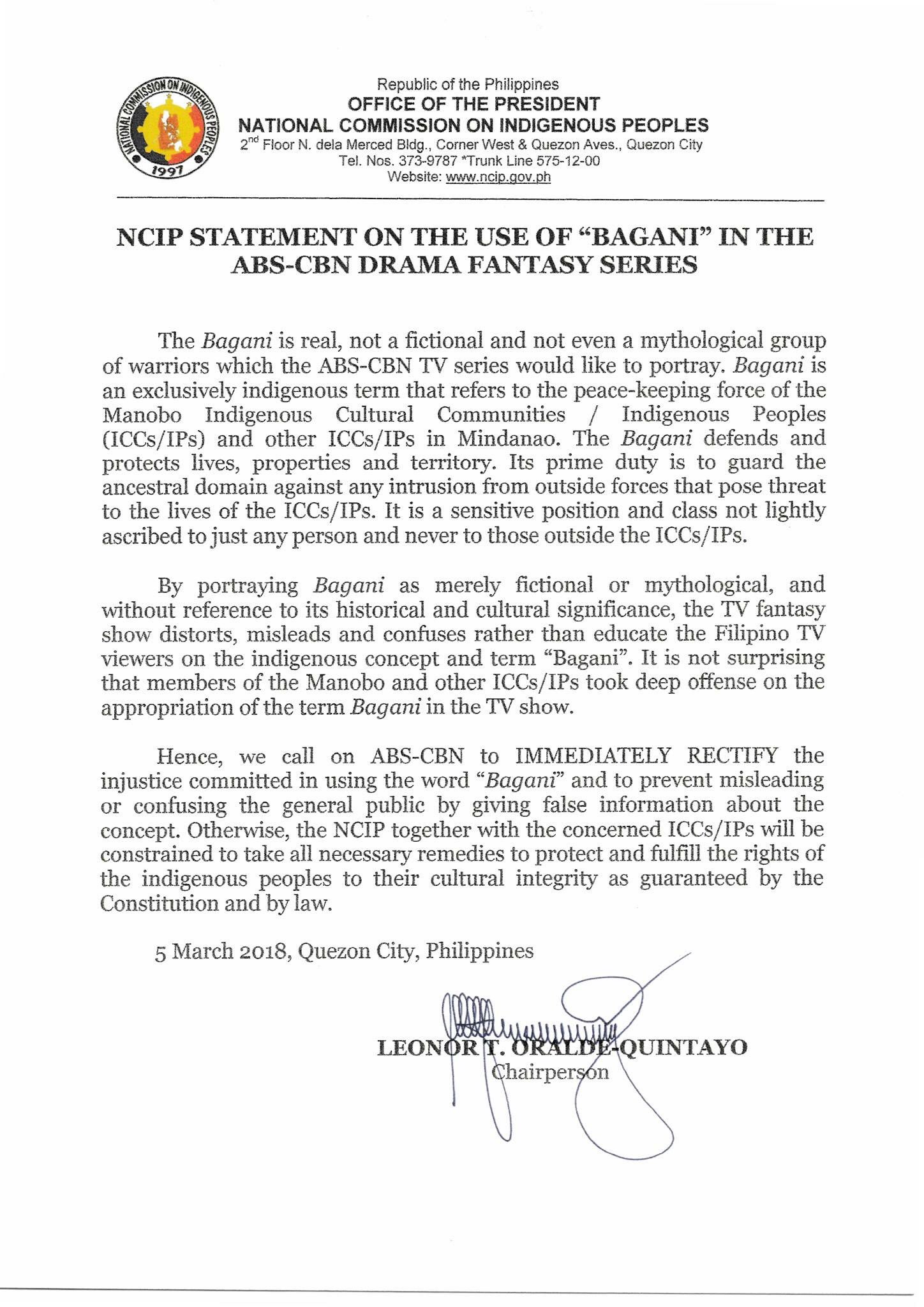 For motives of accumulating profits, commercial television will not hesitate to appropriate cultural symbols and states of indigenous people. ABS-CBN’s flippant drama series, Bagani is an eminent proof.

TV programs have to make a profit; to make a profit requires high viewership ratings to attract commercial advertisers. The problem, however, is the programs they feed us and on which we waste our precious time are horrifyingly dull, trashy, immature, homogenous clones of each other (a basic feature of our consumer culture). Although TV researchers and writers are trying their best to remedy this seemingly incurable defect as to resort to cultural appropriation, still our TV programs (particularly the teleseryes) never pass beyond uniformity, silliness, and sentimentalism.

One watches Bagani and cannot help noticing the whole show is, it seems, trying to make a fool of itself. Nobody knows what the term “Bagani” means; not the actors (God help them!), and definitely not the writers who seem to suffer from gross confusion, until we are referred to the very legitimate and very constructive complain made by the National Commission on Indigenous Peoles (NCIP):

“The Bagani is real, not a fictional and not a mythological group of warriors which the ABS-CBN TV series would like to portray. Bagani is an exclusively indigenous term that refers to the peacekeeping force o the Manobo Indigenous Cultural Communities / Indigenous Peoples (ICCs/IPs) and othe ICCs/IPs in Mindanao. The Bagani defends and protects lives, properties and territory. Its prime duty is to guard the ancestral domain against any intrusion from outside forces that pose a threat to the lives of the ICCs/IPs. It is a sensitive position and class not lightly ascribed to just Amy person and never to those outside ICCs/IPs.” – NCIP Statement on The Use of “Bagani” in The ABS–CBN Drama Fantasy Series

The situation is made truly tragic not by the lack of imagination of the TV researchers and writers nor the silliness of the program itself, but by the fact that we are entirely ignorant of the culture of our indigenous brothers. That is shameful. Indigenous culture with its knowledge and wisdom and practices that insist on respect for the natural environment, as opposed to our excessively materialistic and frivolous way of life.

“By portraying Bagani as merely fictional or mythological, and without reference to the historical and cultural significance, the TV fantasy show distorts, misleads, and confuses rather than educates the Filipino TV viewers on the indigenous concept and term ‘Bagani.’ It is not surprising that members of the Manobo and other ICC’s/IPs took deep offense on the appropriation of the term Bagani on the show.”

On the part of indigenous people this is even more demoralizing. The TV institution, with an almost complete disregard of their circumstances, has never given them a just representation. When they appear on TV, they are often stereotyped, and never given their authentic image and voice as though their existence has no certain basis in reality. To transform indigenous culture into a mere marketing vehicle is a supreme act of disrespect and greediness.

Commercial television is never interested in serious culture. It is only interested in ratings and revenues. Its cynicism toward indigenous culture is absolutely astounding. The TV series Bagani is an acrid example of cultural distortion inflicted on indigenous reality. Considering the fact of the sufferings and lasting grievances of indigenous people at the hands of rapacious multinational corporations and the state that want to take their ancestral domain, programs like this obscure, they do not enlighten.

Of course we can always choose to turn off our lousy television.

Carlo Rey Lacsamana is a Filipino born and raised in Manila, Philippines. Since 2005, he has been living and working in the Tuscan town of Lucca, Italy.