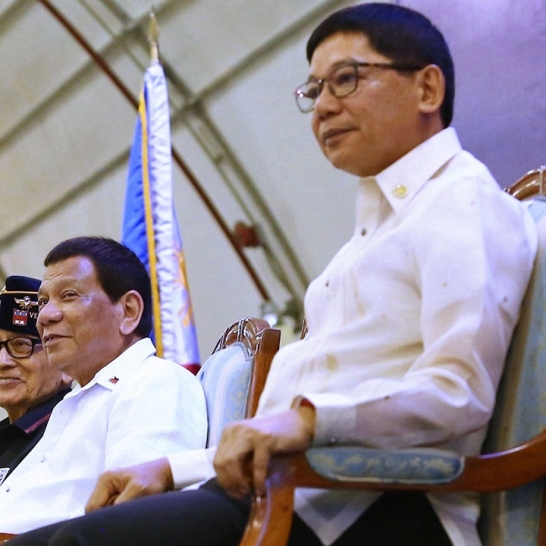 Since late 2018, the Philippines’ top intelligence official has been spreading fake and wrong information from pages taken down by Facebook. He justified this by saying they’re “informative” and reflect the “artistic expressions of our people.”

This was weeks after President Rodrigo Duterte claimed there was a plot, dubbed Red October, to oust him. The military and the police echoed Duterte’s unsubstantiated claim, implicating sectors and personalities critical of the President.

The following month, November 2018, Monteagudo shared a total of 40 posts from The Daily Sentry.

He shared The Daily Sentry posts almost every day in December 2018, with a total of 82 posts, or more than double the posts he shared in November.

NICA is under the Office of the President, which receives billions in confidential and intelligence funds.

Rappler asked Monteagudo for comment as early as last Friday, October 2, but he did not respond to this article’s specific findings. He instead referred this reporter to a statement he posted on Facebook on Sunday, October 4, defending his online actions against progressive lawmakers, who slammed him for spreading fake information against them on Facebook.

A retired police general and graduate of the Philippine Military Academy (1981), Monteagudo told Rappler in a text message: “Why don’t you investigate [Bayan Muna Representative Carlos] Zarate et al as well? And once and for all be honest to yourself and to our people – if they are really CPP [Communist Party of the Philippines] members?”

Zarate is part of the Makabayan bloc composed of progressive lawmakers. They used to be allies with President Rodrigo Duterte but they left the alliance in September 2017, following the souring of peace talks with communist rebels and the rejection of two left-leaning nominees by the Commission on Appointments.

Facebook took down The Daily Sentry’s page in January 2019 because it was part of the dubious network related to TwinMark Media Enterprises, a company that violated Facebook’s “misrepresentation and spam policies.” The website, however, continues to operate; it rebranded itself into The News Spy but has kept its original network identity or url.

After the takedown of Facebook pages amplifying The Daily Sentry in January 2019, there was a significant decline in Monteagudo’s sharing of posts on his Facebook account.

This changed starting March 2020, when he began sharing posts from the official page of the National Task Force on Ending Local Communist Armed Conflict (NTF-ELCAC).

But from May to September 2020, data also showed that Monteagudo repeatedly shared content from dubious, anonymously-managed pages known for perpetuating lies about government critics and red-tagging them. These included the pages of Enlightened Youth and BUKAS-ISIP.  (READ: With anti-terror law, police-sponsored hate and disinformation even more dangerous)

On September 22, Facebook took down these two pages, as well as hundreds of other military- and police-linked pages, for “coordinated inauthentic behavior.” This angered the military. (READ: Army captain named as operator of fake Facebook network)

Rappler scrolled through Monteagudo’s recent Facebook feed and found at least a dozen posts with false, fabricated, and baseless claims between September 1 and September 28 alone.

Monteagudo shared content from questionable pages, some of which have been rated false by fact-checkers.

These pages included Lamrag Sinirangan and Pinoy Expose, which Rappler earlier found to be labeling as terrorists critics of the anti-terror law.

Some of the claims were posted by Monteagudo himself, and not just shared from other pages, like the post below. His recent posts mostly targeted progressive lawmakers.

From May to September, Monteagudo shared posts by Presidential Communications Undersecretary Lorraine Badoy, who’s been slammed by leftist lawmakers for her relentless red-tagging. He shared a total of 202 posts from Badoy during the 5-month period.

Badoy’s actions have prompted the House to again defer plenary debates on the proposed budget of the Presidential Communications Operations Office, with some lawmakers wanting her fired.

During the House budget hearing of NICA, Kabataan Representative Sarah Elago grilled the agency over Monteagudo’s Facebook posts tagging the bloc as “communist-terrorists.”

Elago said they will file a case against the NICA chief at the National Bureau of Investigation.

In 1992, former president Fidel V. Ramos repealed the Anti-Subversion Law, which previously declared the CPP illegal and made membership in it punishable by up to 12 years in prison.

What is prohibited by the law, under the Revised Penal Code, is taking up arms or, in essence, being part of the New People’s Army, the armed wing of the CPP.

On July 3, 2020, Duterte signed the controversial Anti-Terror Law, which punishes with life imprisonment terrorism, facilitating terrorism, and recruiting members for terror groups – a move that groups say gives the government more room to go after critics.

In a statement he posted on Facebook, Monteagudo denied he is sharing fake information and insisted that the posts against Makabayan bloc lawmakers are truthful.

He said he shares posts because he sees them “as artistic expressions of our people.”

“[They] accused that my posts in my Facebook account are fake, implying that I am a purveyor of false information. I, therefore, categorically deny the said accusations! The reason why I share posts in my FB personal account is no different from all FB account holders. It is because I find the post inspiring or entertaining or informative,” Monteagudo said.

“Thus, I shared posts in my FB because I see them as artistic expressions of our people similar to the sentiments of former rebels, Indigenous Peoples (IPs) victims and parents who have finally gained the courage to stand up and reveal the truth about members of the Communist Party of the Philippines (CPP) who are now in Congress,” he added.

However, data show that Monteagudo posts wrong or misleading information against other government critics, not just the leftist lawmakers.

In October 2016, a few months into Monteagudo’s new role, senators slammed NICA for basing its intelligence report on a website publishing fake and erroneous information.

NICA submitted a report to the Senate blue ribbon committee, saying there was a Chinese missile silo or launch facility under the mountains of Zambales, near the disputed Scarborough Shoal.

It turned out that the information came from a “satirical and entertainment” website, according to panel chair Richard Gordon.

Senators then questioned the poor intelligence skills of the NICA, pointing out that it received P700 million in funds at the time. – with a report from Rambo Talabong/Rappler.com