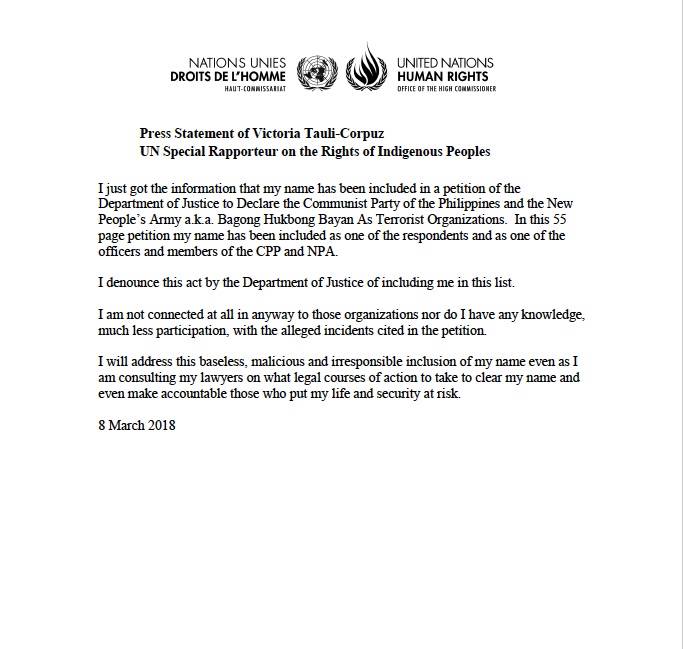 Rights group Karapatan condemned the listing of more than 600 persons, human rights defenders and critics of the Duterte government in the proscription petition filed by the Department of Justice (DOJ).

The filing of the petition in February followed President Rodrigo Duterte’s  pronouncement in January this year to “go after the legal fronts’ of the Communist Party of the Philippines-New People’s Army (CPP-NPA). Following the government’s unilateral announcement of peace talks termination via Proclamation 360 and the declaration of the CPP-NPA as terrorist organization via Proclamation 374, Duterte also threatened the crackdown on CPP-NPA supporters.

Karapatan also said the petition not only sought to declare the CPP-NPA terrorist organizations, but also named individuals as their supposed leaders or members, including those who are dead, missing and members of paramilitary units accused of killing Lumads in Mindanao.

The group slammed the inclusion in the list of their own officer, Elisa Tita Lubi, Karapatan National Executive Committee member and former interim Regional Coordinator of the Asia Pacific Forum on Women, Law and Development (APWLD). Lubi is also a Martial Law human rights victim who is included among those to be granted reparation.

The national office was also in disbelief with the inclusion of the names of their nine-member quick reaction team arrested in November 2017 and human rights defenders in Negros. The quick-reaction team responded to the killing of two members of a fact-finding mission investigating cases of harassment and other human rights abuses carried out by a local landed family clan against farmers and communities involved in a land dispute in Brgy. San Ramon, Bayawan, Negros Oriental.

“The list of odd concoction of individuals in the proscription petition for terrorism forebodes a prelude to a more intense crackdown. It is part of a shotgun witch hunt designed to sow and create a condition of widespread and extraordinary fear and panic among the populace, in order to coerce the critics, dissenters, social activists, human rights defenders and revolutionaries alike to give in to the government’s repressive demand,” human rights lawyer Atty. Edre Olalia said.

Olalia enumerated the following observations on the proscription petition:

UN Special rapporteur placed ‘in the same category as terrorists’

Victoria Tauli-Corpuz, appointed in 2014 as UN Special Rapporteur on the rights of indigenous peoples and former Chair of the UN Permanent Forum on Indigenous Issues, was among the named individuals in the petition.

“Unfortunately, along with other indigenous peoples rights defenders, the UN Special Rapporteur Vicky Tauli-Corpuz was included in the list, thus putting her in the same category of terrorists,” posted Atty. Manja Bayang on her Facebook account.

“This is a continuing act of reprisal against the Special Rapporteur who has issued statements calling the Philippine government on its duty to protect the rights of indigenous peoples in the Philippines. She was previously condemned by Palace Spokesperson Harry Roque as intentionally shaming the government due to her (and Cej Jimenez’) statement on the displacement of thousands of Lumads in Mindanao. This further shows the disdain of this government against the UN,” said Bayang.

UN human rights experts responded to the inclusion of their Special Rapporteur in the list.

They also pointed out Tauli-Corpuz has immunity from legal proceedings as long as she is with the UN, as provided in the Convention on the Privileges and Immunities of the United Nations of 1946.

“The attack against the Special Rapporteur is taking place in the context of widespread extrajudicial executions and ongoing attacks against voices who are critical of the current Government, including human rights defenders. The President has himself publicly intimidated Special Rapporteurs,” the experts said.

The International Indigenous Peoples Movement for Self-Determination and Liberation (IPMSDL) strongly condemned the DOJ’s “harassment of human rights defenders in the Philippines by filing trumped-up charges against alleged terrorists.”

The group hit the inclusion of their officer, Global Coordinator and CPDE (CSO Partnership for Development Effectiveness) Co-chair Beverly Longid. They described Longid as “an Indigenous Bontok-Kankanaey activist from Cordillera, who has served various national and international organizations and alliances upholding indigenous peoples’ right to self-determination
and liberation.”

Sherwin De Vera, regional coordinator of ilocos Network for the Environment (Defend Ilocos) condemned his inclusion in the list as “another malicious and baseless accusation against me by the DOJ under the behest of Duterte and the AFP.”

“My work as an environmentalist and human rights advocate is not connected in any way with the CPP-NPA. I am ready to answer and prove that this allegation is false in the proper time and forum,” said De Vera.

De Vera was recently illegally arrested and was temporarily released on bail with a hearing scheduled on April on the trumped-up charges filed against him during his arrest.

“Being on the “terror” list placed me, including my family, on dangerous grounds. The peril is obvious with the results from Duterte’s Tokhang list and his call for the killing of suspected rebels in exchange for monetary reward. It also puts us on the cross-hairs of Duterte’s army of online trolls that propagates hate and violence against those critical of his rule,” he added.

“The list also contains seven names of paramilitary group members including four from the New Indigenous Peoples’ Army (NIPAR), led by Aldy “Butchoy” Salusad, who have standing warrants for the killing of Lumad leader Datu Jimmy Liguyon. They also have been presented and paid as surrenderees, consistent to their being all-purpose pawns in the military’s repressive schemes,” Karapatan Secretary General Cristina Palabay said.

Salusad killed Liguyon inside the latter’s home, in view of Liguyon’s family member in 2012. The Lumad leader repeatedly refused mining incursions in their ancestral domain prior to his death.

The proscription petition was filed through Senior Assistant State Prosecutor Peter Ong at a regional court in Manila on February 21, 2018, and a copy was only recently seen by media outfits and human rights groups.