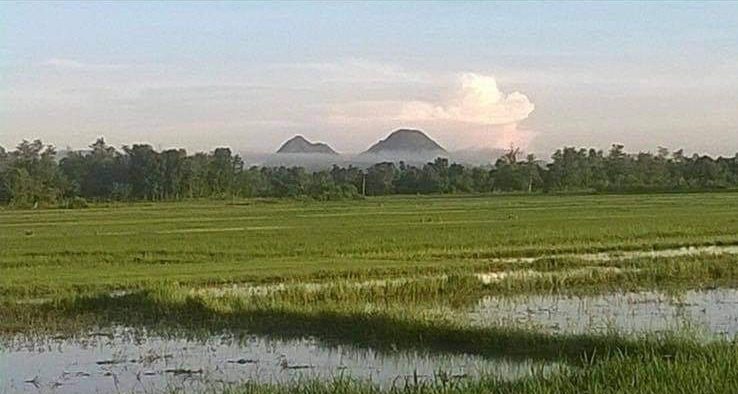 TARLAC — Mayantoc is a rice-producing town in the western side of Tarlac, five kilometers from the Romulo national highway. Its people are Ilocanos with relatives in the neighboring town of Camiling. It was a barangay of Camiling until 1916 when then American Governor General Francis Burton Harrison granted the move of several Filipinos led by Francisco Santos to declare Mayantoc a separate town.

In Mayantoc, one encounters a traditional way of preparing food for special events. The host family slaughters one animal, be it a cow, pig, or goat, and cooks all the viands using the different parts of that animal — skin, organs, entrails, and bones aside from the meat. The strategy is to prepare food pangkaadwan (Ilocano for “for many”). It is the Ilocano solution to the need to extend the amount of food that will be served to all the attendees, invited or not. That is all right in a town where bloodlines run deep; in Mayantoc, no one leaves a party hungry.

In formal celebrations, invited guests are led into a reception area where they are seated and properly served. The uninvited watch from a distance and wait until they are led to a separate buffet table or handed packed meals. It is a re-spectful crowd that does not jostle with each other for food. Everyone leaves the event smiling, exchanging stories about the event. Not a few leave with packed meals for the family member left at home.

Hope Santos Fajardo, who has lived all her 43 years in Mayantoc says, “During our town fiesta or at weddings, the hosts prefer that their guests go home busog (with full stomach). It would be shameful for the hosts if they run out of food to feed everyone.”

Generally, cows and pigs are slaughtered for big events like weddings, birthdays, political victories, funerals, town fiesta, or the baptism of the first grandson. The kalding (Ilocano for goat) suffices for gatherings of family members on an annual visit to their hometown.

Fajardo’s cousin, Regina Jocelyn Caluya, who once had a catering business says, “We can make different dishes from the internal organs of pigs like Igado (a dish using mostly liver), crispy dried dinuguan, and the usual chicharon bulaklak. The traditional pata recipe is lauya (pork bones boiled with papaya). The head, neck, ears can be cooked into crispy sisig. The meat is cooked into embutido and asado. The bony parts are cooked into adobo and menudo.”

Fajardo adds sweet sour pork to the menu derived from a slaughtered pig. “Some Ilocanos refer to sweet sour pork as pantran-pantran. The reddish color of the dish reminds them of the red Pantranco buses that used to ply the Manila-Tarlac route.”

“The food cooked from a cow vary depending on the occasion,” says Caluya. “The dishes served at weddings are more special than the food served after a funeral for example. More people gather after a funeral so the food prepared are pangkaadawan so that the food have less ingredients like vegetables.”

Ello Cabrera, 77, is a rice farmer who has mastered the art of cooking kalding dishes, especially pinapaitan. When requested to cook kalding, Cabrera chooses a doe that is two- to two-and-a-half years old as he says it has the right balance of meat and fat. From a sacrificed kalding, the Ilocanos prepare their premium dish, pinapaitan, as well as caldereta, kilawin, and sinampalukan. To prepare all these dishes, Cabrera uses the internal organs and entrails (offal), meat, skin, and bony parts (head, knees, legs). The only parts he discards are the drained blood, the teeth, and the hooves.

Cabrera cooks kalding in a makeshift kitchen in the backyard a few meters away from the poso (water pump). In his kitchen team are a butcher and at least two assistants. He doesn’t measure ingredients but is fully dependent on tantsa (estimate) based on pinagraman (Ilocano for taste).

If it is a lunch event, Cabrera’s team starts work at dawn to give ample time for chopping and boiling the different kalding parts. With its neck slashed and its body drained of blood, the kalding is lifted and rotated slowly over the fire. The objective is to clean the skin of all hair until it is clear and smooth.

The butcher slits the belly to extract the offal. He handles the tiny, fine intes-tines (or what the butchers call the liblibro (Ilocano for books; the butchers say the intestines look like a stack of books in their original state) and the gall bladder (apdo) with special care as these have the pait for pinapaitan. He then separates the meat from its skin before these are chopped.

Cabrera cooks the pinapaitan first. It is a soupy concoction with an aroma the locals find heavenly, prepared with the chopped offal, initially with just the liblibro for the bitter flavor. If the concoction is not bitter enough for Cabrera’s hardy Ilocano tastebuds, the chopped apdo is added as well. Locals scoop pinapaitan onto a cup and slowly sip the steaming hot broth, breathing in the aroma with much gusto.

The caldereta is cooked with the meat that has been separated from the skin. The sinampalukan is prepared with the kalding’s bony parts— the legs, the knees, and the head—that have been chopped into serving pieces. Sampalok (tamarind) leaves are added.

To make kilawin, the beer drinkers’ pulutan (appetizer taken with alcohol), Cabrera douses the chopped skin of the kalding (may still have a thin layer of meat) with the juice of kalamansi and mixes in chopped onions.

When the cooking is done, Cabrera sits against a tree while sipping on his cup of pinapaitan. “Bawa’t higup masarap (Every sip is delicious),” he sighs with a toothless grin.#