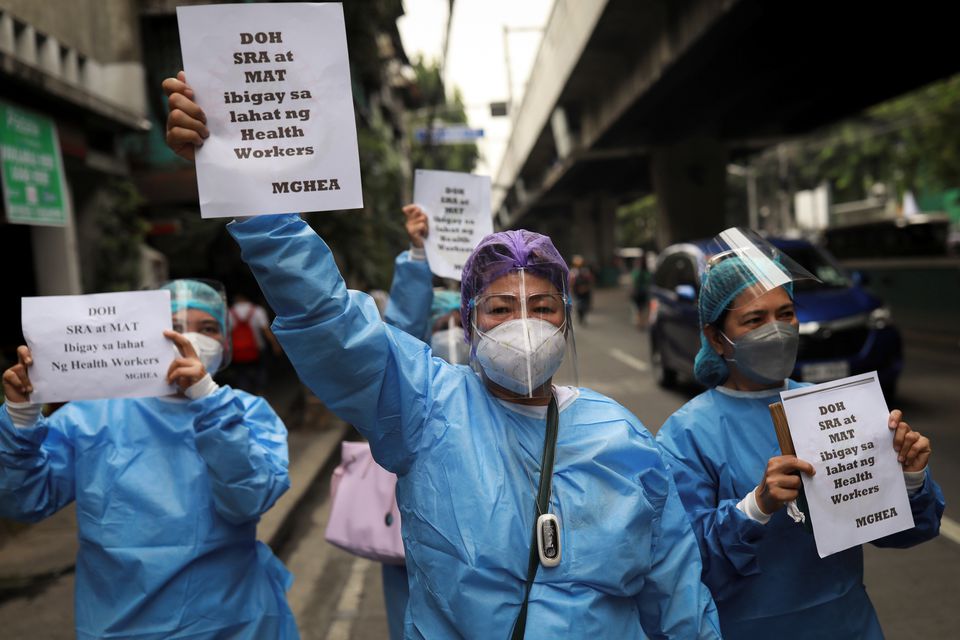 The health workers’ 10-day deadline for Department of Health (DOH) to release COVID-19 benefits has ran out, and so did their patience.

[We court death in this work. We don’t know if one of these days we will go home as ashes and our families would no longer see us alive. And this is what you will do to us?

President Rodrigo Duterte himself on August 21 ordered the DOH and the Department of Budget and Management (DBM) to “use whatever money there is” and pay the health workers who have yet to receive their long overdue benefits. Unpaid benefits were due the health workers since last year, while two-thirds of the current year has now passed.

However, as of publishing, medical and non-medical frontliners have waited in vain despite even the president’s ultimatum.

On September 1, the usually busy streets around the vicinity of DOH headquarters were filled with health workers demanding long overdue benefits, while rattling empty pots and kitchen utensils as part of their noise barrage protest.

Garbed in their PPEs and hospital uniforms, a group of nurses, doctors, as well as the hospital janitorial staff reiterated their demand for accountability and immediate resignation of Duque amid “gross negligence, inept, and inefficient response” to address the ongoing pandemic.

The groups noted the major anomalies and failures of Duque such as:

[Until now, the DOH could only boast of the P311 million special risk allowance they released, from which only a handful of health workers would be able to benefit from that. There should be P11.9 billion for health workers. The DOH said they are still looking for funds.]

On August 25, DBM said they have released the P311.79 million for the SRA of both public and private sectors. Through this, the agency added that they were able to provide the promised risk allowance for 20,000 health workers secured under the “Bayanihan 2” law.

However, Duque emphasized that only health workers with “indirect” exposure to COVID-19 shall be entitled for the SRA.

This remark further agitated the healthcare workers. They lamented that not a single peso was given to them while they in fact are exposed to COVID-19 since last year.

[The SRA should be released unselectively. The virus does not choose who to infect and all of us could be affected. The SRA should be for all health workers who offer their services and care to the patients who need us.]

Dunguines also decried that the AHDP, same with SRA, has not yet been released to them.

She also pointed out that there is no distinction between public and private health workers and that they are all entitled for the benefits as per DOH Administrative Order (AO) 2020-0054.

Also under this directive, meals, accommodation, and transportation allowance (MAT) including life insurance and sickness and death compensation should also be received by the health workers apart from SRA and AHDP.

The fight shall continue

[As long as we can fight, we will fight. As long as our rights are being trampled, we will not stop fighting.]

Dunguines said this is not only a matter of fulfilling their economic needs but rather a fight for justice.

Health workers vowed to continue their fight against COVID-19 and serve their patients as well as their resounding call to struggle for their protection, safety, welfare, along with the right to quality health care that all Filipinos deserve.