No one is talking about the Tumandok Massacre 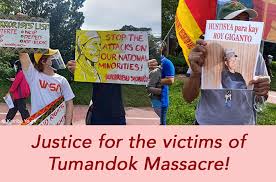 ‘The Build, Build, Build project is ruthlessly rolling on despite the urban and rural poor’s resistance…. Why is Duterte not working and designing people-funded projects with and for them?’

We mourn the death of Christine Dacera, but I cannot help but wish that the massacres committed in the past 4 years attracted the same media coverage.

Every day, I wake up to another update about Dacera’s case. I am grateful that the media is keen on following the story of a young woman’s alleged murder and has helped put the spotlight on victim-blaming, but every day, I still ask: why is no one talking about the death of 9 Tumandok leaders?

The Tumandok massacre was reported and forgotten after just one or two news articles. But if the media had followed the investigation of these brutal killings, I believe that the administration would be pressured to pursue the congressional investigation into the incident, which was filed by Makabayan Bloc representatives.

The massacres were orchestrated by the Synchronized Enhanced Management of Police Operations (SEMPO), designed by PNP Chief Debold Sinas. This was implemented via the same executive orders and memorandum orders that made the massacres of the Negros 14 and Sagay 9 possible. Memorandum Order 32 and Executive Order 70 red-tagged and killed Attorney Ben Ramos and human rights activist Zara Alvarez.

The Tumandok leaders were fighting against the Jalaur Mega Dam. Since 2016, the indigenous community in Panay have been resisting the project. Known more formally as the Jalaur River Multipurpose Project Phase 2 (JRMP II), the project promised to provide uninterrupted water supply to 32,000 hectares of farmland and increase the annual production of rice. However, the construction would leave the agricultural lands and houses of 17,000 Tumandok individuals from 16 indigenous communities submerged in water.

Today, the government has succeeded in displacing these individuals. Instead of providing production support, cash assistance, and subsidies to the largest group of indigenous people in the hinterlands of Panay, they massacred their leaders in the middle of a pandemic. Tumandok individuals and their 16 communities greeted the New Year in an evacuation center. Threats and harassment brought about by increased militarization in their land forced the residents to flee for their safety.

On the eve of December 30, 9 Tumandok leaders were kidnapped, tortured, and killed. Apart from the massacre, 17 individuals were illegally arrested based on trumped-up charges. They are still detained now, charged with the same violations planted on Amanda Echanis, journalists, progressive individuals, and peasant organizers.

In a 2018 report by Panay News, the Korea Export-Import Bank funded the dam project, with Daewoo Engineering and Construction Co., Ltd. as contractor. While majority of Filipinos remain hungry and jobless, the administration is keen on strengthening its ties with foreign investors — using state forces to ensure that these projects push through. The mega dam project promised to provide jobs for thousands of Filipinos, but it killed indigenous people and displaced thousands of individuals along the way.

According to Sama-samang Artista Para sa Kilusang Agraryo, the resistance of the Tumandok community is similar to the resistance of the Aeta community displaced by the New Clark City project, and the resistance of the Lumad community against foreign mining projects in Pantaron Mountain Range. Under the Duterte regime, peasant communities have had to deal with this kind of violence every day. Similarly, the National Grid Corporation of the Philippines released an eviction notice to the farmers of Lupang Ramos a few days before Christmas. The notice threatened to evict 400 farmer families occupying and tilling the agricultural land in Dasmarinas, Cavite.

Even netizens are already using the comments section to air their frustration. While Christine Dacera’s case is important, netizens are recognizing that the alleged rape and murder is being sensationalized as a diversion tactic. You will read ordinary people asking for an update regarding the P15-billion fraud of PhilHealth, and the murder committed by killer cop Jonel Nuezca in the comments sections of the official Facebook accounts of news outlets.

Farmers, indigenous people, the urban poor, and majority of the peasant sectors are always being threatened and displaced to make way for mining projects, dams, and New Clark Cities. The Build, Build, Build project is ruthlessly rolling on despite the urban and rural poor’s resistance. Why is the government not building and developing projects for them? Instead of demolishing their communities and using force to eliminate them, why is Duterte not working and designing people-funded projects with and for them?

We hear the silence now. Except for the progressive organizations and alternative media that are being red-tagged, no one is talking about the massacre of the Tumandok leaders anymore. – Rappler.com

Rae Rival is a high school teacher and a member of Gantala Press, a feminist literary press.