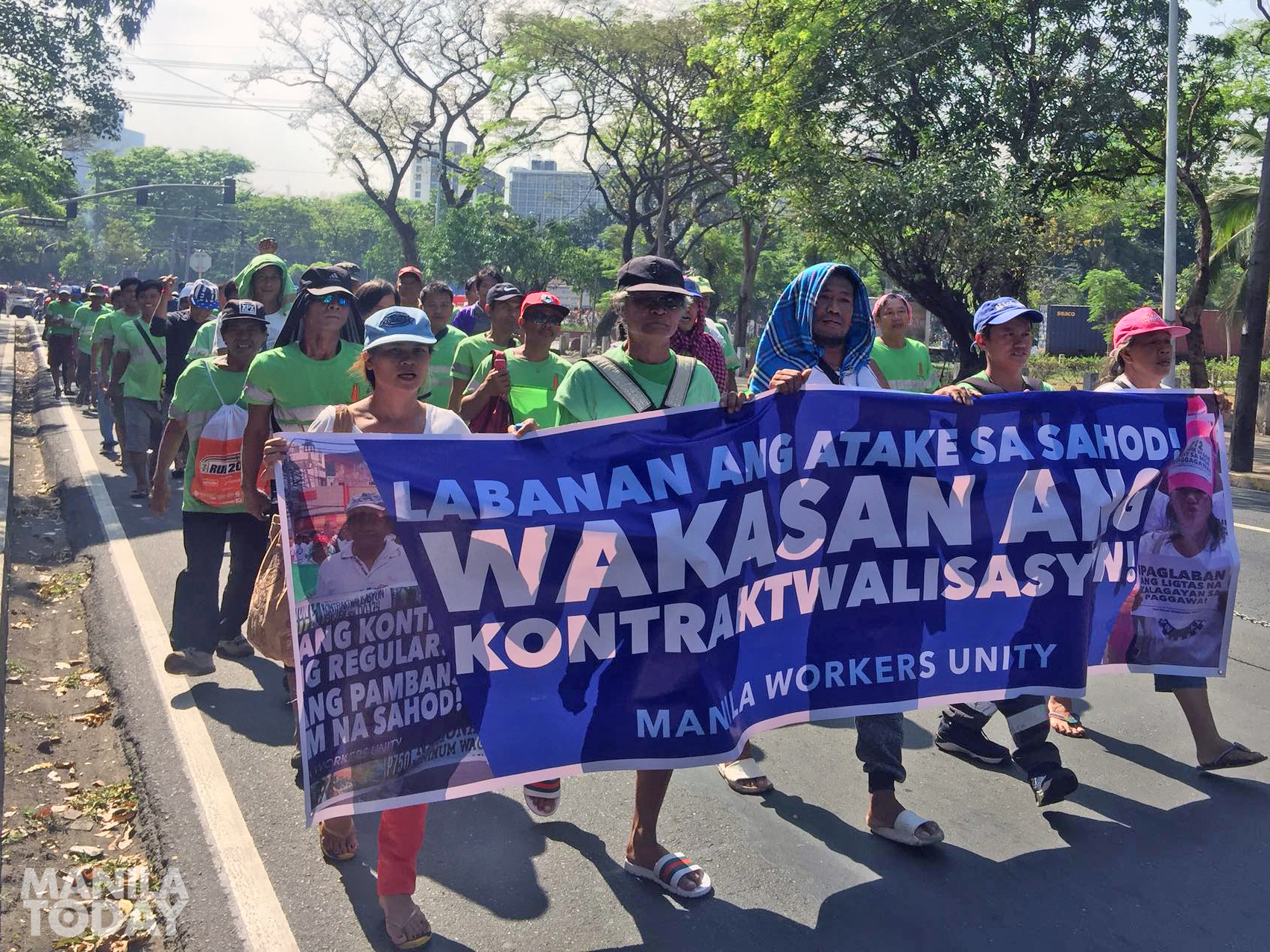 In time for the self-imposed deadline of President Rodrigo Duterte to issue an Executive Order (EO) that will put an end to the widespread contractualization in the country, various labor groups hold protest marches and rallies today at the head office of the Department of Labor and Employment (DOLE) and Mendiola in Manila.

Kilusang Mayo Uno (KMU) and Alyansa ng mga Manggagawa Laban sa Kontraktwalisasyon (ALMAKON) kicked off their protest in a march to DOLE as expression of their rage over Duterte’s “failure to deliver his presidential campaign promise to end contractualization.”

During their march, the groups depicted a worker as a modern-day Christ, symbolically carrying the crucifix of contractualization.

“We are angry as the Duterte administration completely turned away from his campaign promise to end contractualization when he did not sign the EO drafted by labor groups,” said Maristel Garcia, ALMAKON spokesperson.

As Duterte’s deadline lapsed today, Garcia insisted, “Where is the EO now? We could no longer accept Duterte and Labor Secretary Bello’s excuses and alibis! We have waited long enough!”

On February 7, different labor groups faced President Duterte in a dialogue in Davao City and presented a draft EO that will end all forms of contractualization. Duterte asked the groups to give him until March 15 to look into the EO.

“Clearly, Duterte’s non-issuance of an EO today only proved that he is just trying to pacify the anger of workers by pretending to act as if his administration is doing something to end contractualization, just like when DO [Department Order] 174 was released but it only institutionalized contractualization,” said Ed Cubelo, KMU Metro Manila Chairperson.

He continued, “A pro-workers EO that was drafted by the workers themselves will be the only acceptable order that we will support and not a watered-down, weak and pro-capitalists EO.”

“He [Duterte] is allowing millions of workers to suffer slave-like conditions as contractual workers—low wages, no benefits, no security of tenure, dreadful working conditions, and forbidden to join or form unions—while favoring the interest of big capitalists by giving them tax incentives and other profiteering schemes,” said Cubelo.

“If Duterte will not end ‘endo’, his regime will face ‘endo’,” warned Cubelo.

Bello not allowed to speak in worker’s rally

During the rally, Labor Secretary Silvestre Bello III and Undersecretary Joel Maglunsod tried to talk to the protesters and even asked the organizers to let them speak in their program and address the crowd, but KMU leaders did not allow the DOLE officials.

According to Jerome Adonis, KMU national spokesperson, they “would not allow Bello to pacify their anger against Duterte’s failed pronouncements with more lies and excuses.”

He also said that the Labor department already had so much time to do their work and realize their promises.

After tension-filled minutes between DOLE officials and the workers, members of KMU and ALMAKON continued their march to Mendiola where they merged with other workers’ federations and associations under the Nagkaisa Labor Coalition.

In Mendiola, workers held up eggs to say ‘bokya’, also zero or failure, over the numerous demands of Filipino workers.

KMU and ALMAKON warned Duterte of more protests to force the regime to end contractualization and respect workers’ rights.