NUJP urges state forces to give protection to red-tagged journos 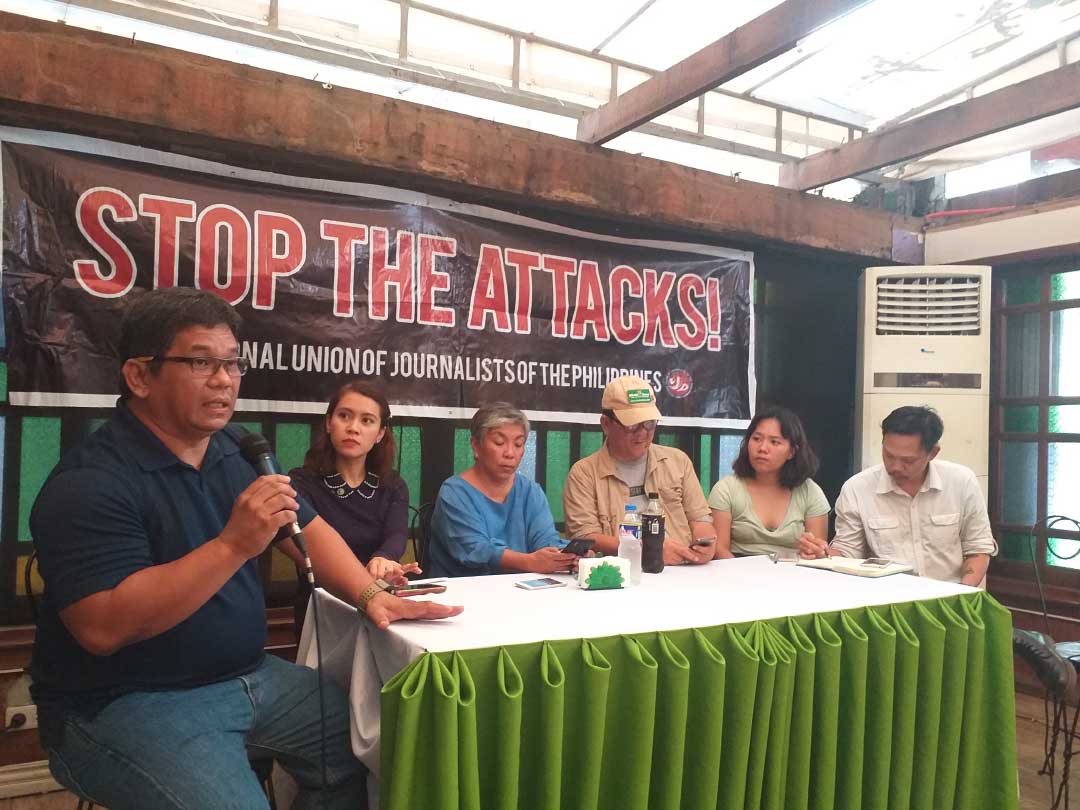 MANILA — The National Union of Journalists of the Philippines (NUJP) called on authorities to investigate the red tagging and threats against their colleagues in Cagayan de Oro.

In a press conference Aug. 30, the NUJP raised alarm over the worsening cases of red-tagging against journalists.

On August 24, flyers sent via courier service tagged Cong Corrales, associate editor of the Mindanao Gold Star Daily, and Froilan Gallardo of Mindanews, as members of the Communist Party of the Philippines and New People’s Army.

The flyer also claimed there is a P1 million bounty for Corrales’s death and made the totally false claim that he was facing a criminal rape with murder case involving a child. The courier packet in which the flyer was sent identified the sender as Danilo Tirso Mantangan of Sitio Camansi, Lagonglong, Misamis Oriental with mobile phone number 09091020123.

JB Deveza, NUJP media safety officer in Cagayan de Oro, said that since February this year, the vilification of Cagayan de Oro press has been increasing. First with the flyers tagging several leaders, organizations, and members of the church as supporters of militant groups, then to Facebook posts targeting journalists and branding them as ‘reds’, and ‘supporters of the New People’s Army.’

“This (attack) is an attempt to brand journalists as combatant parties of the conflict, instead of journalists and civilians. It is a clear attack on the credibility of the journalists targeted, categorizing them as ‘biased’ and ‘supporters of terrorist organizations,” said Deveza.

Asked what he could have done to earn so much hatred as to seek his death, Corrales told the NUJP that the only reason he knows is a column he wrote on the treatment Higaonon evacuees from Sitio Camansi, Barangay Banglay in Lagonglong town, Misamis Oriental had received when they descended on Cagayan de Oro to seek help from the provincial government.

Gallardo, on the other hand, deemed that it could have been because of an interview he did with NPA regarding the raid against Minergy Power Corporation in Balingasag, Misamis Oriental early this month.

“We cannot just write the government’s side, but also the rebels,” said Gallardo, “if they (attackers) think that by doing this they would kill the idea of journalism, they’re wrong.”

Former NUJP chair Inday Espina-Varona said, “There is a strong attempt from government officials to not allow this (interviews with rebels) anymore because it is deemed to be giving score to their enemies.” “The government’s view is: if you don’t want to be red-tagged then you need to condemn certain parties, which isn’t what a journalist does.”

NUJP-NCR Chairperson Jonathan de Santos said attacks like these make it harder for journalists to do their jobs, especially for those covering remote areas under conflict.

The College Editors’ Guild of the Philippines (CEGP) also called on the government to protect journalists who are being targeted and branded.

Trisha Aboy from CEGP’s national office said that even campus journalists are also labeled as communists for writing stories critical to the current government.

“In times like this, journalists should be more united and fight against these attempts of silencing the freedom of the press,” Aboy said.

In her statement, de Guia said the CHR is conducting its own investigation on the matter. She called on members of the security forces in Cagayan de Oro and Northern Mindanao to conduct proper investigations on the red-tagging incidents, and to ensure that the targeted individuals would be protected.

“We in the Commission underscores that journalism is essential to peace, sustainable development, and justice as reporters are the ones going to the most dangerous places to deliver us information and give voice to the most marginalized sectors,” she added.

The post NUJP urges state forces to give protection to red-tagged journos appeared first on Bulatlat.