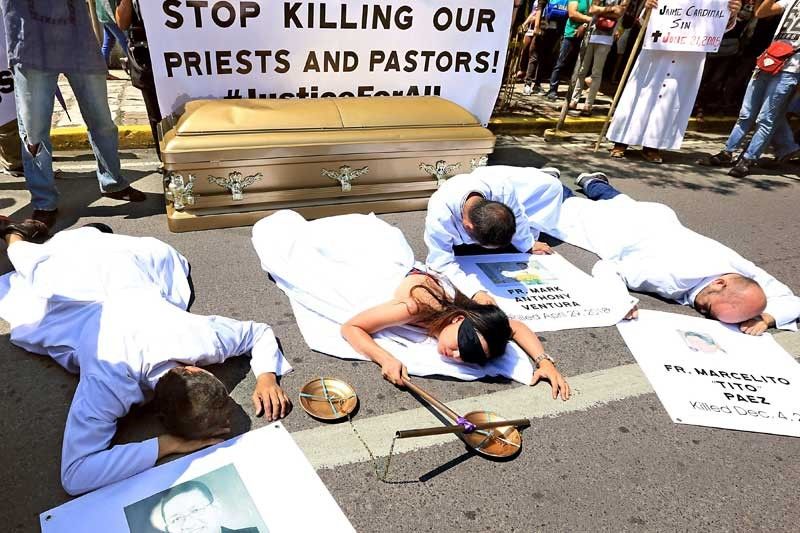 MANILA, Philippines — To claim that extrajudicial killings and abuses linked to the government’s “war on drugs” is just a narrative peddled by the political opposition ignores the experiences of the victims of these abuses, a Catholic priest critical of the killings said Thursday.

Fr. Flavie Villanueva, SVD, in a message to reporters, invited presidential undersecretary Severo Catura to listen to the many stories of those who have lost loved ones in the “drug war” before dismissing them as a political ploy.

To recall, Villanueva was earlier accused of sedition over his alleged participation in the “Bikoy” videos that the justice department said involved “malicious and scurrilous libels and fabricating [of] evidence.” He has denied involvement in the supposed conspiracy.

Villanueva was responding to the remarks of Catura, who serves as executive director of the Presidential Human Rights Committee, and who claimed on Monday, December 7, that concerns over documented human rights abuses by police officers were just a narrative pushed by the administration’s political opposition.

“The accusation of [Undersecretary] Catura that government’s critics are spreading fake news on killings is entirely baseless. The so-called critics are actually the caregiver, providing sincere efforts to defend and console victims of human rights violations to hundreds, if not thousands of widows and orphans, who have been left due to the systematic campaign to kill, kill, kill,” he said.

He added that Catura’s claim was expected.

“The Philippine Human Rights Committee was created to protect the interest of the person who authored (the) killings. Would the head of the committee betray the person who employed him? There are many solid documentation on the systematic pattern of how policemen and their cohorts abused and imposed their authority in this culture of killing,” he added.

The Presidential Human Rights Committee, a bureau of the Office of the President, is primarily an advisory body to the president in addressing human rights concerns.

The chief executive has not had the warmest relations with the Catholic Church throughout his term, and has clashed with church leaders over the controversial campaign against illegal narcotics as well as his remarks on Catholic beliefs.

On Monday, Undersecretary Catura also named the church-based Rural Missionaries of the Philippines as among the groups peddling what he said was a false narrative to make the government look bad.

Despite the over 8,000 drug-linked deaths acknowledged by the national police’s own figures—a number rights organizations say may be closer to 30,000—the presidential human rights chief claimed that the Duterte administration’s infrastructure and education programs are enough proof that it respects the human rights of Filipinos.

“I am inviting Catura to join me and listen to the stories of how the widows and orphans have lost their loved ones and how they are trying to cope and survive. I invite him to have an open mind and heart,” Villanueva said.

“The truth shall always stand. The Church shall demand accountability against those responsible for the senseless killings of both Life and the Truth. We will have our day in court, it may not be now, but it shall surely come.”