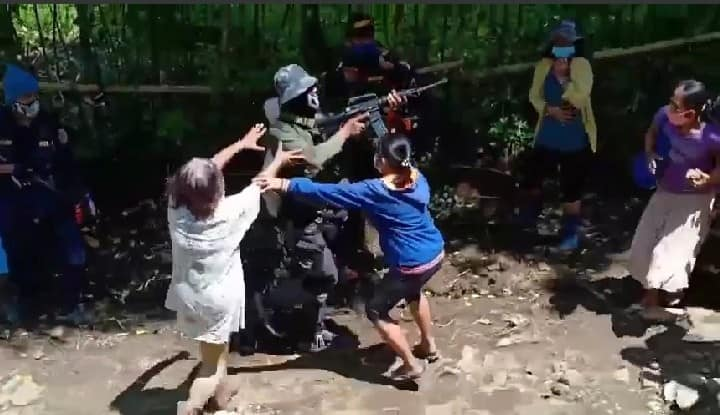 Reports from Samahan ng Mamamayang Nagkakaisa sa Sitio Buntog (SAMANA-Buntog) claim that Buntog is being “fenced off”, and goons are destroying farm plots they come across. “They’re even stealing fruits from our trees,” said Jojo de Leon, SAMANA-Buntog spokesperson, in a text message.

SANTA ROSA, Laguna – Tensions are high in sitios Buntog and Bangyas, barangay Canlubang, Calamba, Laguna, as residents face the threat of eviction at the hands of armed private guards, August 24.
According to reports by the National Federation of Peasant Women (Amihan) and the Katipunan ng mga Samahang Magbubukid sa Timog Katagalugan (KASAMA-TK), armed goons with long rifles arrived on August 24 to attempt to displace the farmers in sitio Buntog.

As of press time, goons and guards employed by Hacienda Yulo are stationed outside sitio Buntog and are blocking access.

Sitio Buntog is part of Hacienda Yulo, a 7,100-hectare sugar estate in Laguna spanning three cities – Calamba, Cabuyao, and Santa Rosa. The hacienda was once owned by the Madrigal clan before it was acquired by Jose Yulo. The 200-hectare area comprising sitio Buntog is slated to become a residential subdivision.

According to KASAMA-TK, Hacienda Yulo was never covered by the Marcos-era Presidential Decree No. 27, or the Aquino-era Comprehensive Agrarian Reform Program.

“This only shows that the land reform laws are rotten,” read a statement by the group. “Farmers can hardly expect that the land they’ve sacrificed sweat and blood will be returned to them, since these laws are riddled with exceptions. It favors the rich, who pay off DAR [Department of Agrarian Reform] and the courts in order to exempt their lands from reform.”

Threats by armed goons have escalated in the previous months despite an ongoing pandemic. Last July, guards equipped with riot shields attempted to evict residents but were forced into a stalemate.

Since then, guards have been spotted in the area, harassing residents. Residents in nearby sitios, like Matang Tubig, have also experienced threats of violence. In some cases, residents are being prohibited from taking videos and photos.

Reports from Samahan ng Mamamayang Nagkakaisa sa Sitio Buntog (SAMANA-Buntog) claim that Buntog is being “fenced off”, and goons are destroying farm plots they come across. “They’re even stealing fruits from our trees,” said Jojo de Leon, SAMANA-Buntog spokesperson, in a text message.

Peasants’ rights organizations are calling for support in defense of the farmers in Hacienda Yulo. “Peasant women should stand firm and assert their rights to land, even though they’re faced with various harassment and other rights abuses,” said Zenaida Soriano, AMIHAN National President.

KASAMA-TK is also calling on Calamba Mayor Marc Justin Chipeco, Laguna Governor Ramil Hernandez, and the Commission on Human Rights to intercede on the matter.

Families in Sitio Buntog have lived there a year after the 1910 Taal volcano eruption. Land disputes placed shifted the ownership of the land, then a 100 hectare plot of land, from the Madrigal clan to the American G. Milne.

As early as 1928, Milne began the process of converting the coconut, coffee, and rice being planted in the area to sugarcane, demolishing farms and houses in the process. Farmers were given the promise of relocation and reimbursement only to become workers in the sugarcane field and the azucarera, the nucleus of the Canlubang Sugar Estate.

The ownership of the land transferred to Jose Miguel Yulo in 1948. During the Second World War, Yulo collaborated with the Japanese as Chief Justice of the puppet regime. After the war, he was appointed as “caretaker” of the Milne estate and eventually, its owner.

Yulo managed to expand the hacienda from the original 100-hectare land title to its present size. The Yulo family’s marriage to the Aranetas, and Jose Yulo’s influential position in government allowed him to secure funds for massive land-grabbing projects.

During the Macapagal administration, Yulo farmers petitioned for a land title grant. Yulo managed to mobilize some farmers carrying placards stating that they did not want land reform, and presented it as evidence that the farmers had changed their minds.

The Yulo family has managed to evade subsequent efforts at land reform by waving their influence like a club. Today, chunks of Hacienda Yulo have been sold off to competing interests by Ayala Land, Lucio Tan’s Eton Properties, the Lopezes, and other owners.

In 2010, agents from the Yulo-owned Land Estate Development Corporation and San Cristobal Realty Corporation arrived to evict farmers to make way for residential housing. Dan Calvo, an architect who acted as spokesperson for the Yulos, led efforts to threaten the residents, resulting in the detention of 10 residents, including three minors.

Aside from Hacienda Yulo, the Yulo family also owns the Yulo King ranch, a nearly 40,000 hectare hacienda in Busuanga and Coron, Palawan, described by Kilusang Magbubukid ng Pilipinas as the “biggest agricultural anomaly of our country.”