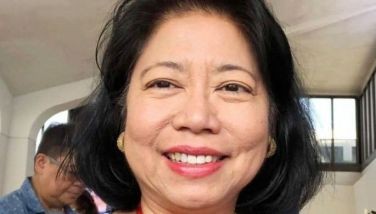 A Filipina health frontliner died in New York on Sunday (PHL time), days after she was assaulted by a mentally disturbed homeless man, the Philippine Consulate General in New York said.

The Consulate General identified the victim as Maria Ambrocio, 58, from Bayonne, New Jersey.

“We grieve with the rest of the Filipino Community over the death of our kababayan, Maria Ambrocio, a 58-year-old health frontliner from Bayonne, New Jersey, who is the latest victim of deranged individuals on the loose in New York City,” the Consulate General said.

Ambrocio had just visited the Philippine Consulate General on Friday afternoon and was walking with a fellow Filipino near Times Square when the suspect knocked her down, it said.

The victim had been placed on life support since Friday.

“Maria’s passing was announced shortly after she was removed from life support a few hours ago. She had been on life support for the head trauma she sustained on Friday afternoon after she was knocked down by someone who was described as a mentally disturbed homeless man,” it said.

“I’m asking for all Bayonne people to say a prayer for Maria Ambrocio. Maria, an Oncology nurse at Bayonne Medical Center, was viciously attacked in an unprovoked assault by a deranged man in Times Square yesterday. Please keep Maria and her family in your thoughts through these difficult days,” he wrote on Facebook.

“Oh my God. Elmer, go to the family. How can we help. We can take her home. That is our vow and our duty. This is so sad. And after Biden praised our nurses for their compassionate, competent, caring work,” Teodoro said in a tweet.

Cato, meanwhile, said he already got in touch with the victim’s family and conveyed their condolences, and offered assistance.

The incident was “the latest in the series of violent acts committed by mentally-ill individuals against members of the Filipino Community in New York City since the start of the year,” the Consulate General said.

“We have joined calls for authorities to take the necessary steps, including heightened police visibility, to protect the public after we noted the surge in anti-Asian hate incidents that targeted some of our kababayan,” the Consulate General added.

“We also supported calls for authorities to take the necessary measures to address mental health issues, especially among the homeless,” it continued.

“We reiterate these calls as we mourn our loss but we also ask ourselves: How many more Maria Ambrocios do we have to mourn before the streets would be made safe again?” it said.

In March, a 65-year-old Filipina was attacked near Times Square in Manhattan, New York City. The Filipina, identified as Vilma Kari by police, was walking down a street when a man suddenly kicked her in the stomach. The suspect was later arrested.

Filipino theater actor and ‘Miss Saigon’ alumnus Miguel Braganza was on his way to his apartment on August 7 when a robber assaulted him and hit him on the head with a gun. —KG, GMA News