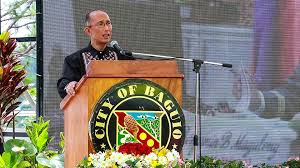 On a trip to Baguio organized by the Department of Tourism last November, I experienced firsthand how the city took stringent health protocols seriously. A negative antigen test 24 hours before your scheduled arrival, a health check on the city’s outskirts, another one in a holding area within the hotel premises (The Manor at Camp John Hay), and another one just before you enter the hotel itself—the process of getting there was the very definition of long and tedious. And masks and shields were required all throughout and wherever we went.

Clearly the city wasn’t taking any chances with the virus, despite the fact that it was one of the first to reopen its borders to tourists.

The trip gave me a glimpse of what Baguio City’s Mayor Benjamin Magalong was trying to achieve—a delicate balance between protecting citizens from the health scare and spurring the economy to help struggling local businesses that depend so much on earnings from visitors.

That Mayor Magalong was named to an important post in the government’s Inter-Agency Task Force (IATF) against COVID-19 in July 2020 only validated his administration’s better-than-usual efforts in curbing the virus. The mayor understood what needed to be done and was clearly on top of the situation.

Which is why hearing about his involvement in that controversial party at The Manor involving a celebrity and influencer last week was surprising and incredibly disappointing. The good mayor was caught committing glaring lapses in established health protocols, lapses that he should’ve known better than to commit. After all, he was the person tasked to lead efforts that could literally spell the difference between life and death.

Almost as soon as news of the infraction made its way through social media and traditional media outlets, Magalong took responsibility for his actions and acknowledged his shortcomings.

“In hindsight, being a senior officer of the Task Force, I should have done an immediate spot correction of the errors that I witnessed during that time,” Magalong wrote in a letter addressed to IATF chief Carlito Galvez Jr.

But the mayor took it one step further and tendered his resignation from the IATF as contact tracing czar.

“Much as I have given my best to discharge my duties for the task force, this is a reminder that a higher standard is expected of me,” he said.

Malacañang has said the IATF is not accepting the resignation, but Magalong is adamant. His decision is irrevocable, he said.

To anybody following local politics, this is an unusual development. After a bungled operation, allegations of wrongdoing, or any headline-grabbing controversy, the typical next step for involved government leaders and civil servants is vigorous denial and defensive posturing. No matter the weight of evidence, pressure and admonishment from other, more senior public officials, and the crushing impact of public bashing on social media, the person in the center of the firestorm will often insist on innocence and point to political enemies as the source of the “smear campaign.” The person will cling to power tighter than a sloth clings to a tree branch.

This is precisely why Magalong’s decision to resign from the IATF is such a big deal. In a culture of impunity, where high-ranking officials caught committing crimes or violating ordinances and rules can not only escape punishment but actually have the gall to hold on to their posts, the Baguio City mayor is demonstrating the moral and ethical implications of being a public official. It’s not just about wielding power and enjoying the attention and respect of your constituents—it’s about setting an example for the people that look up to you.

Yes, public officials are only human, and are therefore prone to making mistakes. But what the mayor said in his statement is true: They are held to a higher standard than everyone else. When that sacred trust is broken—whether it’s due to willful negligence or a momentary lapse in judgment—a sincere apology is the least people can expect. And the truly honorable thing to do is to offer to resign in order to reinstate the integrity of the position.

And that’s exactly what Mayor Magalong did. “Mukhang may kakulangan ako (Apparently, I had shortcomings), so it’s all about accountability,” he said. It takes guts of steel to admit a slip-up; and it’s even more impressive when you’re prepared to back up that admission with a concrete step to try and repair the damage your actions caused.

After months of reports of officials and personalities allegedly breaking protocols but not being punished enough beyond a slap on the wrist, it’s honestly refreshing to hear of someone who still knows what it means to be a man of principle.

To be fair, it wasn’t just Mayor Magalong who offered to resign as a matter of courtesy and moral obligation, and not just because they were accused of any offense or misconduct. Last year, National Economic Development Authority Secretary Ernesto Pernia, Department of Information and Communications Technology (DICT) Undersecretary for Operations Eliseo Rio, and officials from the Philippine Health Insurance Corporation (PhilHealth), led by anti-fraud legal officer Thorrsson Montes Keith, all quit, citing various reasons but all somewhat related to dissatisfaction and internal conflict within their respective agencies. (In the case of Philhealth, it was because of alleged “widespread corruption” within the state health insurer).

But sometimes, it just seems like the other list—of those who ought to resign for actual transgressions—is much longer, and it’s enough to make us throw our hands up in defeat, and, well, resignation. (PA)