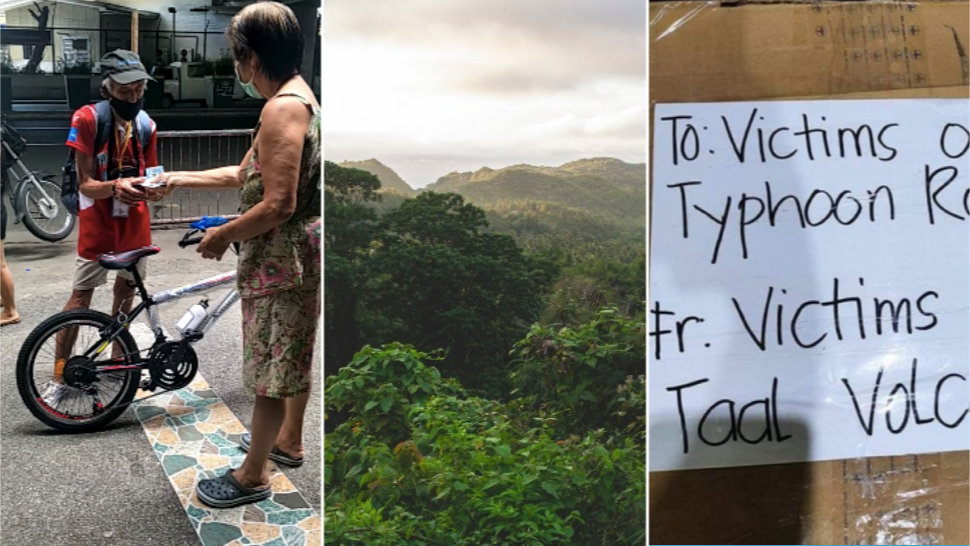 You don’t need us to tell you 2020 was a shitshow. But just file us under the glass-is-half-full column, because we refuse to believe there wasn’t anything to celebrate about this year.

So here’s a tiny list of good news. Because at this point, we’ll take what we can get:

We’re constantly bombarded with news about how humanity is destroying the planet, so it’s good to hear the opposite sometimes. Some people thought the GCash Forest feature on the GCash app was just a virtual game, but, it turns out, it’s actually tied to a real-life effort to protect and rehabilitate the Ipo Dam watershed. Earlier this month, the World Wildlife Fund announced that it had completely reforested 75 hectares of the watershed thanks to the millions of transactions made through GCash Forest.

2| PEZA says investments shot up despite the pandemic

The pandemic may have severely impacted businesses around the globe, but at least one agency reported good numbers this year. The Philippine Economic Zone Authority (PEZA) said it has approved 318 applications for new and expansion projects that are projected to generate employment of about 70,000, according to the Philippine Information Agency. The applications prove that many investors are still looking to invest in the Philippines, it says.   ADVERTISEMENT – CONTINUE READING BELOW CONTINUE READING BELOW Recommended Videos https://www.dailymotion.com/embed/video/x7xqors?api=postMessage&apimode=json&autoplay=true&embed_index=1&id=fb3037fea5d99&mute=true&origin=https%3A%2F%2Fwww.esquiremag.ph&pubtool=cpe&queue-autoplay-next=true&queue-enable=true&ui-highlight=false

“Only PEZA [among other IPAs] registered year-on-year growth in foreign investment commitments during the July-to-September period with P20.3 billion, up 97 percent from P10.3 billion last year,” the Philippine Statistics Authority said.

Award-winning gymnast Carlos Yulo has raked in multiple accolades in recent years, but, for the first time, he placed first in the world in the International Gymnastics Federation’s (FIG) world rankings in the floor exercise. Yulo shares the top spot Spain’s Rayderley Zapata. As far as we know, this is the first time ever a Filipino has achieved this feat.

Everybody loves a good underdog story, and this one is no exception. Jose Angelo “Anjo” David graduated with a master’s in law degree from Harvard University, arguably the most prestigious institution for higher learning in the world. David grew up in a “small, cramped town in bustling Metro Manila” and describes his father as a self-made local government employee who chose to send him and his two siblings to a public high school so he could save enough money to afford to send them to college. Read his inspiring story here. ADVERTISEMENT – CONTINUE READING BELOW ADVERTISING

Antiseptic and disinfectant alcohol was definitely one of the most in-demand consumer products this year. After demand shot through the roof because of the pandemic, big companies heeded the call to produce more of them. In particular, manufacturers of the drinkable kind of alcohol, such as San Miguel Corp.’s unit Ginebra San Miguel Inc., Alliance Global Inc.’s Emperador Inc., Asia Brewery Inc. and Tanduay Distillers Inc (both under Lucio Tan’s LT Group), all pledged to produce rubbing alcohol to help replenish the supply for hospitals and consumers.

6| Jollibee cited as one of the world’s best employers

Everybody loves Jollibee as much as everybody loves a company that treats its employees fairly. This year, the ‘bee earned two citations as a world-class employer. The first is from the Gallup Exceptional Workplace Awards, given to organizations “whose cultures drive high engagement among its employees.” Jolllibee Foods Corp is the first ever Philippine-based company to be honored by Gallup.  ADVERTISEMENT – CONTINUE READING BELOW ADVERTISING

JFC also made it to Forbes’ list of World’s Best Employers, along with Robinsons Retail Holdings and Alliance Global Group.

At least three eagles were spotted in the forests of Lupon, Davao Oriental. According to reports, the eagle family is within the Mount Kampalili-Puting Bato Key Biodiversity Area of Davao Oriental, which is one of the few large habitats of Philippine Eagles in Mindanao. Fly free, eagles.

People’s kindness knows no bounds. This was displayed yet again earlier this year when Taal Volcano acted up yet again. One of our favorite stories is when farmers from Benguet donated their harvests to those displaced by the eruption. Thousands of kilos of vegetables made their way to evacuation centers in Batangas.

On a somewhat related note, victims of the Taal eruption paid it forward, sending aid to those affected by typhoon Rolly. Faith in humanity restored.

8| UP builds digital library to save dying Filipino languages

The Philippines has anywhere from 120 to nearly 190 languages, and it’s a little sad to know that many of them are dying out. To save these dying Philippine languages, computer scientists and linguists from the University of the Philippines created a digital dictionary called Project Marayum that anyone can access on the Internet.

According to the United Nations World’s Women 2020 report, 25 percent of parliamentary seats worldwide is filled by women. And there are now 20 countries with a woman head of state or government, up from 12 in 1995.

Sometimes, a heartwarming story is all it takes for us to just forget all the bad news, even for a few moments. In June, it was the story of an old man who stopped by a bike shop in Pasay nearly every day expressing interest to buy a P4,500 bike. But he only had P2,000. In a gesture of goodwill that melted the hearts of netizens eveyrwhere, the bike shop’s owner finally decided to give the old man the bike, and he didn’t even have to shell out his P2,000.

We might take turning a light bulb on or grabbing something from the fridge for granted, but the reality is that hundreds of millions of people around the world still don’t have electricity. However, that number dropped from about 860 million in 2018 to 770 million in 2019, according to the International Energy Agency.

12| Unemployment is going down

The number of jobless Filipinos was at a staggering 7.2 million (about 17.6 percent of the working-age population) last April. But according to Philippine Statistics Authority, that number has since gone down to 3.8 million (8.7 percent). We’ll take it .

13| Student who received rocks instead of laptop, finally gets real laptop

In Iloilo, a student who ordered a laptop online was dumbfounded when he opened the package and found rocks inside. It was especially heartbreaking considering the student and his fisherfolk parents saved up for the gadget so he could have something to use for his online classes.

Thankfully, a group of kindhearted individuals, led by MMDA Traffic Chief Bong Nebria took pity on the kid and decided to buy him an actual laptop. The online shopping platform reportedly gave the kid his money back and the student he plans to give the laptop he ordered to a relative who needs it.

14| More elephants and lions are roaming the plains of Africa

In the Philippines, adults can have sex with children as young as 12 and that isn’t considered statutory rape. That’s about to change as the House of Representatives overwhelmingly approved a bill on third and final reading seeking to raise the age of sexual consent to 16. A similar bill has already been approved at the committee level at the Senate.#