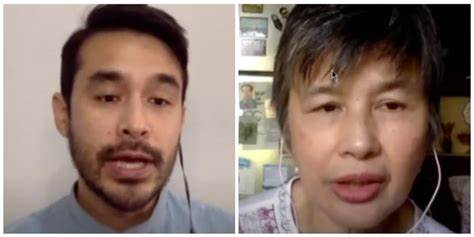 Award-winning journalist Atom Araullo has always been a proud son of Dr. Carol Pagaduan Araullo, an activist who fought against the dictatorship of President Ferdinand Marcos.

The two share similar backgrounds as graduates of the University of the Philippines, and they both eventually became student activists during their time in Diliman.

In their first-ever joint interview as mother and son, Atom and Carol told Noel Ferrer of “Level Up Exclusive” on Radyo Katipunan their similar but separate journeys into activism.

He said he knew his mom is an activist growing up, but she never actually raised him to follow in her footsteps.

“He came to it on his own. I mean, that’s really the only way you can do that,” Carol said.

Both mother and son attended UP at a time of political turmoil in the country — Carol came of age during martial law; Atom during the protests against President Joseph Estrada.

Carol’s path to activism started at the Diliman Commune of 1971. As a young student, she initially did not discriminate between the violence inflicted by the police and protesters. She condemned both, but witnessing the shooting of Pastor Mesina as students barricaded the University Avenue became a turning point for her.

“That was my baptism of fire ‘ika nga. That radicalized me. I realized that it is the State, the government, that has a monopoly on sanctioned violence,” she said.

From then on, she continued attending demonstrations without telling her parents. They found out eventually, but she knew how to take care of herself and did not get hurt in the protests. It was only when martial law was declared that they became really worried for her safety.

Carol went underground before the Marcos dictatorship was established. Several days later, she met up with her parents at an uncle’s house, where they tried to dissuade her from her decision.

“They asked me to go home and for the first time, my dad cried,” she said. “He said, ‘You know, if you don’t… if you leave the house and you don’t agree to come back, you’re on your own.’ And then I said, ‘Well, I guess that’s how it has to be because kung hindi ako kikilos, laban sa martial law, sino ang kikilos? Kung hindi ngayon kelan, pa?’”

Atom, meanwhile, had a “parallel experience” as a freshman in UP at the height of the ouster campaign against Estrada.

While on his way to the campus one day, he chanced upon a demonstration on Commonwealth Avenue during the State of the Nation Address. The situation descended into violence — there was bludgeoning and hurling of rocks — and he became curious about what was happening.

“I wouldn’t say I was radicalized at that moment, pero parang if I learned anything from my family is not to be afraid of those kinds of incidences, mga protests,” he said.

“I can imagine that you can react to it two ways,” he said. “One is you become fascinated about it, [you] want to learn about it and another is matakot ka and just say na ‘Ay, ayokong ma-involve diyan, basta ako mag-aaral lang ako.’  I went the other way ‘no, kasi hindi ako takot sa aktibismo kasi alam ko nanay ko aktibista e.”

Atom eventually became an activist in his college days. He would not confer that label to himself now out of respect to the many sacrifices of full-time activists, but he said that activism did change him as a person. He believes it even saved him from himself.

“I would have been insufferable kung hindi ako naging aktibista. I would’ve been too self-involved, feeling ko masyado akong na-in love sa sarili ko to an extent,” he said.

Atom admitted that activism first appealed to him as an intellectual exercise; what interested him at the beginning was the social analysis and thinking about the big picture.

Eventually, he realized that for all his smarts, he did not know anything after all and learned to listen to the farmers, the urban poor, and other disadvantaged groups.

While both mother and son became activists while they were in UP, the two said activism is not at all the dominant culture in the university.

Atom said he knows many people from other schools who show more civic-mindedness than some UP alumni, expressing their concern about social issues and asking what they can do to help.

Carol said it was the same even during her time in UP.

She said, however, that because the counterculture has existed for a long time, even those who did not like activism during their student days have imbibed the tradition as they grew older.

Carol said some students become activists precisely because they are still young and free from duties and responsibilities unlike adults.

She also said it’s the social, political, and economic conditions which breed activists, but people respond to situations differently.

Carol said sometimes students whose families are well-off have more leisure to engage in activism, but it all boils down to their value system.

“Kung ‘yung anak mo ay nag-iisip at lumaki na may empathy at tsaka may sense of justice, ‘yung ganon, ‘yung hindi makatiis sa situation of injustice, activism will find them wherever they are,” she said.

Atom agreed. More than his mother’s background, he said the value system he formed from both of his parents was the key to finding his way as an active student leader in UP. He credits his father especially for passing onto him empathy, sensitivity, and hard work.

“Hindi naman naituturo ‘yon, you just live by example, you just observe it in the people that surround you, in my case, my parents,” he said. “That is the foundation where everything was built up and you know by the time I became a college student, formed na ‘yon.”

While some parents do not want to send their children to UP in order to avoid activism, Carol and Atom said activism is really just about becoming passionate about issues close to your heart — be it climate change, environmentalism, human rights, national sovereignty, democracy, and others.