Duterte reiterates goal to get rid of corruption, drugs 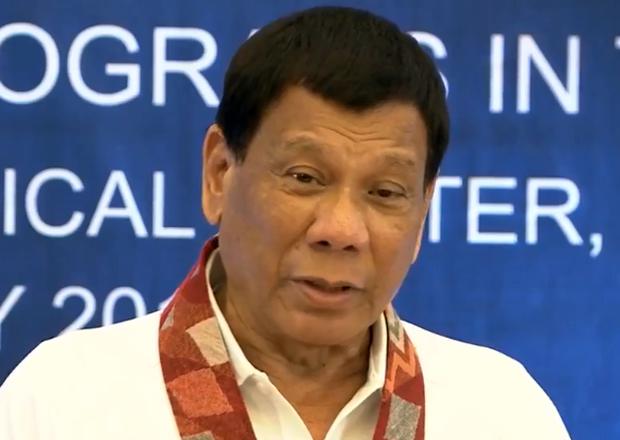 President Rodrigo Duterte speaks at the launching of the Malasakit Programs for Visayas by unveiling the Malasakit Center dedication plate at the Vicente Sotto Memorial Medical Center (VSMMC) in Cebu City on Monday, Feb. 12, 2018. (Photo from an RTVM video)

CEBU CITY – Speaking before local chief executives from Visayas and Mindanao, President Rodrigo Duterte on Monday reiterated his goal to get rid of corruption and illegal drugs that ruin the country.

“I took my oath to preserve the Republic of the Philippines and to protect the people. You heard my promise. Let’s all be candid here. We’re all government workers. I called you because I need your toil. I’m not pleading for it. It’s your duty for the country,” he said.

About 200 local officials, including governors and mayors, attended the event at the Radisson Blu Hotel in Cebu City on Wednesday evening.

Shortly before he left, President Duterte assured them he will not seek any term extension.

“This is my commitment to you. If you can pass that (constitutional) amendment by 2020, and will call for an election, I will not accept the transition period for me to remain as president. To remove all doubts, I will step down. There’s no problem with that,” he said.

President Duterte said he told officials of the military to make sure he will make good of his promise.

“If I don’t, shoot me. It’s your job to preserve the Constitution,” he said.

The country’s top executive reminded local officials to stop corruption and to stay away from illegal drugs otherwise he will go after them.

“I’m not threatening. I just want to remind you,” he said.

“I am not the kind of dictator that some wanted to portray. If I don’t dictate and allow everybody to implement the law in their sweet time, no one is moving. Cars are smuggled. There can never be a respite,” he said.

“I was thinking if I made the right decision to run as president. But since I am here, I will stop corruption. I will do it, and then stop illegal drugs. I will work on peace and order, and talk to enemies of the state and have an agreement so that we can pass through this planet peacefully,” he added,

President Duterte said the war on drugs will continue to save the country from further deterioration.

He said 40 percent of the total barangays in the country are contaminated with illegal drugs, while 9,000 barangay captains are reportedly into illegal drugs.

“We’re deteriorating because of illegal drugs. It’s getting to be very uncomfortable. We can make this nation, not really that great, but at least a comfortable country for all. The problem is illegal drugs,” he said.

President Duterte took a swipe at agencies that criticize his policies, particularly leaders of the Catholic Church.

President Duterte called on the police to continue going after those involved in the illegal drugs trade as he promised them his full support.

“I am building a country, and I will kill anyone who destroys it. I am already old. I already have enough of accolades and applause. I don’t need them. My dreams have happened,” he added.