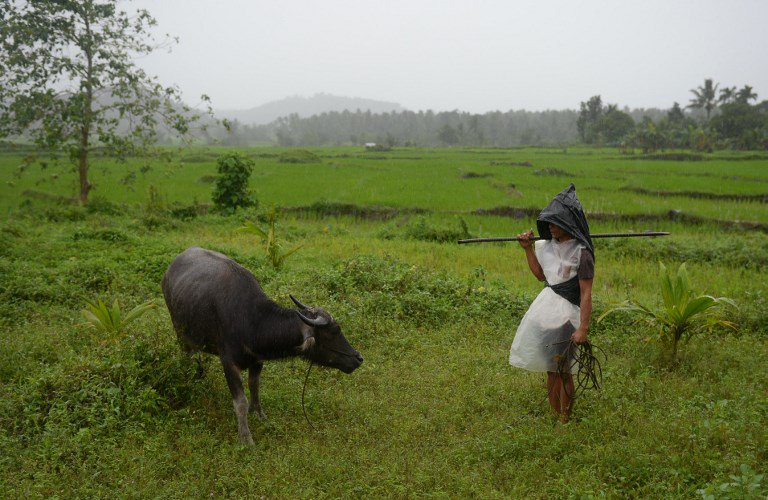 This photo taken on January 27, 2018 shows farmer Jay Balindang tending to his water buffalo under heavy rains in a rice field at the foot of the Mayon volcano in the town of Guinobatan in Albay province.
Balindang is among nearly 10,000 farmers who have been affected by the eruption of Mayon volcano that began earlier this month. / AFP PHOTO / TED ALJIBE

As blistering lava spews from the seething volcano nearby, farmer Jay Balindang leads his buffalo through the ash-strewn paddy fields of the no-go zone, creeping closer to danger in a desperate bid to support his family.

Tens of thousands of people have been evacuated from around the erupting Mayon volcano, as a white-hot cocktail of gas and volcanic debris streaks down its flanks, threatening local communities who rely on the fertile land at its base.

Fearing a significant eruption that could engulf whole swathes of the nearby land in burning rock and lava flows, authorities have cordoned-off a nine kilometer (six mile) danger zone around Mayon.

But that has not stopped defiant farmers like Balindang from tending to crops and livestock that are a crucial part of their livelihoods.

Each day the father-of-eight leaves his children at a government evacuation centre, sneaking past police as he returns to his small farm at the foot of the volcano to feed his precious “carabao” water buffalo.

“I am not afraid of the volcano. We are used to its activity,” the 37-year-old told AFP, at the edge of his rain-lashed rice fields, a few kilometers inside the danger zone. 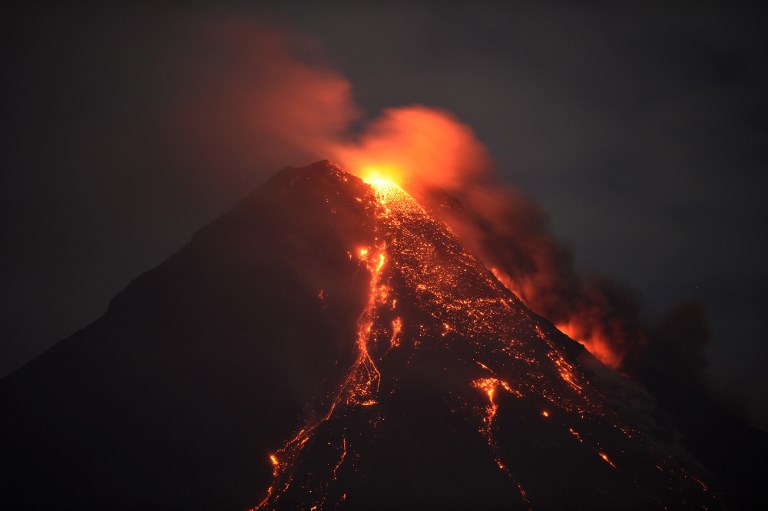 This photo taken on January 28, 2018 shows Mayon volcano spewing lava ash from its crater, as seen in Daraga town, south of Manila in Albay province.
Authorities have imposed a no-go zone around the 2,460-metre (8,070-foot) mountain as they warned of a hazardous eruption within days, leaving more than 77,000 people stuck in crowded shelters, likely for months.
/ AFP PHOTO / Ted ALJIBE

Farmers make up around 10,000 of the 84,000 people displaced by the eruption of Mayon in Albay province, some 330 kilometers southeast of Manila.

The lush region is famous for its chili peppers, as well as less fiery crops like rice, corn and vegetables.

All are threatened by the volatile volcano, which has gushed molten lava and belched giant clouds of superheated ash since it began erupting two weeks ago.

Local authorities say that beyond the immediate damage to crops caused by the coating of smoldering embers, there are concerns that heavy rainfall could combine with ash and rock to form deadly, fast-moving mudflows that could sweep away entire settlements and block vital rivers.

“This is a new and daunting challenge to our agriculture workers who in the past had to cope with typhoons, landslides and floods,” Agriculture Secretary Emmanuel Pinol said.

Farming the ‘Ring of Fire’

Farmers are among the most vulnerable to the meteorological miseries that afflict the Philippines, which is hit by an average of 20 typhoons a year and is in the earthquake-prone volcanic belt around the Pacific known as the “Ring of Fire.”

The 2,460-meter (8,070-foot) Mayon has been both a blessing and a curse to the farmers living near its slopes for generations.

Volcanic ash can kill vegetation immediately after an eruption, but as it seeps into the ground it can also enrich the soil with minerals that sustain future crops.

“If the ash is thin, it would become a fertiliser but if the ash is thick it would mean farmers who had spent money a lot of money to plant the vegetables lose everything,” Renato Solidum, head of the Philippine Institute of Volcanology and Seismology, told AFP.

Vegetable prices have already begun to soar in parts of Albay as the eruption hampers access to key crops.

“We are very famous for these dishes wherein the (taro) leaves are being grown just at the foot of Mount Mayon,” Elsa Maranan, chief of the agriculture department’s local breeding station, told AFP.

“If all this will be destroyed then the production of our delicacies and the income of our farmers will be very much affected.”

In a bid to stop farmers from slipping back to tend their own fields, local authorities have set up communal areas, where farmers can graze livestock on ash-free grass.

“We appeal to them not to be stubborn because they are putting the lives of our responders in danger,” Brigadier-General Arnulfo Matanguihan, head of a local task force for the eruption, told AFP.

But many still make a daily hazardous dash back to their own land.

Balindang said the choice was clear — if he ensures that his pigs, carabaos and cows are fed, then his family will also be assured of something to eat.

“It’s very difficult because I don’t know if we will have any rice left to harvest. For now, we have nothing,” he said.