‘Not ending with archives’: What’s next for Project Gunita? 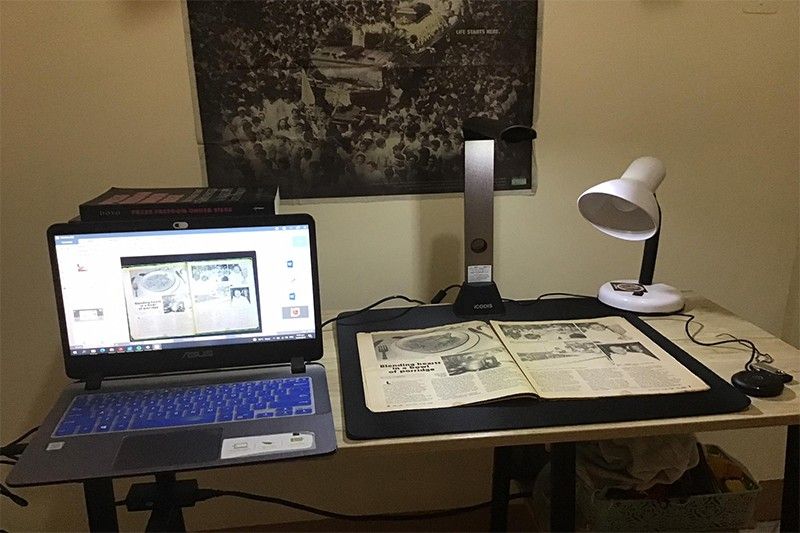 MANILA, Philippines — Following the launch of Project Gunita, a citizen-led online archive of Martial Law era materials, it seems as though the heavy task of memorializing a nation’s dark past is over for its 19-year-old project co-founder Karl Patrick Suyat.

But archiving is only the beginning, Suyat said.

The UP student urged the public to maximize their digitized repository of dozens of newspapers and books covering the 21-year dictatorship of Ferdinand Marcos Sr.

When Marcos Sr.’s only son and namesake won the May 9 presidential elections by a wide margin, the first thing that crossed Suyat’s mind were the Martial Law archives.

As a son of an activist and grandson of a political detainee, Suyat made it his personal mission to preserve the memory of his family’s late patriarchs — both of whom exposed Suyat to the Martial Law atrocities at a young age of seven.

But Suyat knew he wasn’t the only one who feared an imminent banning of Martial Law-related materials. A few days after the elections, Suyat and his friend crowdsourced for funds online, generating over P100,000 to purchase physical copies of newspapers and books as well as a book scanner.

“People’s generosity and their affinity with the cause are the lifeblood of this project,” Suyat said.

It also provides scanned copies of old newspapers and magazines from the Marcos dictatorship, including WE Forum, Ang Pahayagang Malaya, Veritas, and The People’s Voice. A snapshot of old newspapers that covered the 1986 snap elections leading up to the People Power Revolution, which ended the decades-long rule of Ferdinand Marcos Sr.

Project Gunita’s collection were mostly sourced from Filipiniana booksellers or private citizens’ collections who donated their archival materials or sold them to the independent archiving team at a cheaper price.

“Andito sa atin ‘yung materyales. The only question is paano natin to miminahin isa-isa and how are we going to make content – memes, informative videos, explainers, articles. Every single thing we could make out of it,” he said.

Although younger Filipino generations mostly read their news from social media nowadays, Suyat hopes to renew the public’s interest in the mosquito press – or the alternative media that were critical of the elder Marcos’ administration.

Likened to mosquitoes, the publications were known to have a “small but stinging bite” amid the heavily-controlled press during the Martial Law period.

According to Amnesty International, around 72,000 were imprisoned, 34,000 were tortured and 3,240 were killed under the martial law rule.

In a span of two months, what used to be a team of two expanded to over 30 youth volunteers, whom Suyat said were not only concerned about preserving history but also fighting against the rampant disinformation online.

In a nation deeply divided by electoral dis- and mis-information, Suyat said their digital archive hopes to democratize martial law-related facts to the public in a matter of a few clicks.

As they nearly complete digitizing their martial law materials, Suyat emphasized the need to ramp up online efforts of debunking lies with facts.

In doing so, Project Gunita is targeting to launch its website and social media pages to the public before Marcos Jr. makes his first state of the nation address at the end of July.

There is also much left to be done in fighting disinformation offline, Suyat said. He encouraged more educators to utilize their online archive in teaching students truthful accounts that transpired during martial law.

“The truth is on our side. Nasa atin yung mga ebidensya, gamitin na natin,” Suyat said. “We will never concede a single page of history.”