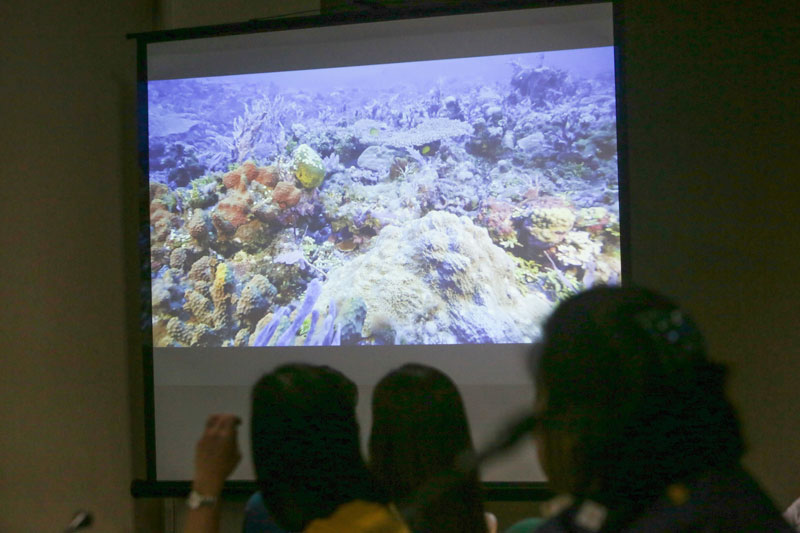 The seven, led by Bayan Muna Rep. Carlos Zarate, suggested that the House committee on foreign affairs conduct the inquiry.

In Resolution No 1623, Zarate and his colleagues said the United Nations Commission on the Limits of the Continental Shelf awarded Benham Rise, renamed Philippine Rise, to the Philippines in 2012.

“Despite the Chinese government’s adverse view on Philippine Rise, the Department of Foreign Affairs (DFA) granted China a permit to conduct maritime research in the eastern seaboard of the Philippines starting Jan. 24,” they said.

According to Rep. Gary Alejano of Magdalo, who blew the whistle on the DFA’s approval of China’s application, the “research” will last for a month up to Feb. 25.

Makabayan noted that various groups and individuals have aired opposition to the Chinese expedition “as it appears to be a repeat of China’s ‘modus operandi’ used in 2005 under the Arroyo-era joint marine seismic undertaking (JMSU) that jeopardize our claims in the Recto (Reed) Bank.”

“Under the JMSU that the then Arroyo administration entered into with China, the latter was able to discover and confirm the enormous reserves of natural gas in Recto Reed Bank, where one field already holds about 2.7-3.4 trillion cubic feet of the valuable resource,” the lawmakers said.

They said China did not share with the Philippine government the information it gathered in the joint marine seismic study.

They claimed that China “is now very zealous in taking over these rich natural gas deposits as evidenced by its aggressive stance, even constructing islands and placing missile systems to control the area.”

They noted that the National Mapping and Resource Information Authority of the Department of Environment and Natural Resources already conducted a survey of Philippine Rise between 2004-2008 and produced a highly detailed 3D digital bathymetric model done by Filipino scientists.

Another state agency, the Bureau of Fisheries and Aquatic Resources (BFAR) of the Department of Agriculture, has also been conducting annual fisheries research and experimental fishing expeditions in Philippine Rise to determine the tuna fishery potential of its waters, Zarate and his colleagues said.

The UP National Institute for Geological Sciences (NIGS) and UP Marine Science Institute (UPMSI) have also been collaborating with counterpart institutions from Korea and Japan since 2016 to begin initial exploration of the seabed in the Philippine Rise, they said.

They said other Filipino marine geologists and biologists have produced academic papers and analyses for policy considerations and have been analyzing samples and observations gathered from research cruises and have made interesting findings and potential discoveries.

“The Philippines, in fact, already has a deep-sea research vessel, known as BRP Gregorio Velasquez, that can conduct its own study,” they added.

They pointed out that contrary to the claims of the Duterte administration, the Philippines does not have to rely on China to study the Philippine Rise.

Alejano earlier revealed the arrival of Chinese vessel Ke Hue Hao in Philippine waters on Jan. 22, or two days ahead of its supposed month-long research.

He said the Chinese ship was located northeast of Palanan, Isabela yesterday.

Alejano reiterated its appeal to the DFA and other concerned agencies, including the University of the Philippines, to closely monitor activities in the Philippine Rise.

“What we should make sure now is compliance of China with all the requirements demanded by the Philippine government as conditions to the permit issued. In particular, we should be wary on the sharing of information that will be culled from the expedition. Filipino scientists on board should be given equal access to all results of the research,” he said.

Alejano also chided administration officials for saying Filipinos alone could not do research in Philippine Rise because of the huge cost involved.

“It is not because our scientists do not have the ability to conduct research, it is because our government does not allot sufficient funding for it. In fact, there have already been expeditions there by Filipinos to support our claim over Benham Rise before it was awarded to us in 2012,” he said.

He said the BFAR had proposed funding for a research facility in Benham Rise during last year’s budget deliberations, but Congress rejected the proposal.

“This administration has shown no interest and support on strengthening our presence in Benham. Thus, it has no ascendancy to say that Filipinos cannot conduct research in the area given its lack of support,” he said.

Zarate criticized the DFA for its “precipitous claim” that the Chinese “research” in the Philippine Rise would benefit the Philippines.

“If we are to study recent history of Chinese marine studies, like the joint marine seismic undertaking (JMSU) during the Arroyo administration, it can be seen that it is China that rakes in most of the benefits. In contrast, what we got are just useless blurry pictures,” he said.

He said China discovered the location of rich marine resources in Philippine waters through the joint marine seismic study.

“The Chinese did not share the information they gathered with the Arroyo government,” he said.

The case forced then president Gloria Macapagal Arroyo to no longer renew the marine seismic study agreement, he said.

“China became more aggressive after confirming the presence of resources through the information it gathered via the JMSU. Chinese ships aggressively cruised the seas near Palawan in 2007, even if it was well outside the South China Sea and the JMSU area,” he said.

He said the “betrayal of our national patrimony and sovereignty is being repeated by the present administration in the case of Benham or Philippine Rise.”

The UPMSI, meanwhile, said its collaborative research with China on Benham Rise is just one of the many similar arrangements in the past with other countries, including the United States.

In a statement, UPMSI said it “has been collaborating with oceanographers from different countries (such as the US, South Korea, Japan, China and Taiwan) on research along the Pacific seaboard as early as the 1980s.”

UPMSI’s clarification came on the heels of criticism sparked by the government’s allowing Chinese researchers to conduct a scientific expedition in the Philippine Rise.

It its statement, the UPMSI stressed the importance of international cooperation when it comes to research that involves large-scale processes.

It explained that its research partnership with the Institute of Oceanology of the Chinese Academy of Sciences followed similar studies on ocean currents in the area conducted with US scientists from 2011 to 2014.

“Understanding the dynamics of these major ocean current systems is complex and requires extensive resources. For research questions that involve large-scale processes beyond national jurisdiction, international collaboration is important because the collective efforts, data and information from all countries involved will enable us to acquire a better understanding of what is really happening,” it added.

“Results from these (previous) cruises clearly showed that measurements over longer periods were needed, validating the insights from pioneering research that started in the early 1980s. Studies with long-term measurements can only be achieved if resources from different countries are combined and shared,” said the institute.

“In 2016, the Chinese oceanographers initiated discussions about possible collaboration on this particular (research)… As it was related to our research interests, we continue to explore ways to meaningfully engage with them,” it added.

The UPMSI said the collaboration supports its initiative to develop a national oceanographic program that can help in understanding better the changing climate and ocean processes.

The collaborative research involves a study on temperature, salinity and current distributions in several locations in the Philippine Rise region. UPMSI said instruments of the Chinese institute will be used in the research.

The research activity, UPMSI said, will focus on the North Equatorial Current, which splits off the Philippine coast to form northward and southward moving bodies of water known as the Kuroshio Current and the Mindanao Current, respectively.

The UPMSI said studies on the currents are necessary as these affect climate in the region.

“The Kuroshio is responsible for the transport of heat to the rest of the North Pacific and therefore is an important driver of the regional climate and even the El Niño/La Niña cycles,” it said.

“To understand the Kuroshio’s role on climate and to help develop predictive models, we need to know how often and by how much it varies; thus the need to measure the currents and temperature structure over a long period of time,” UPMSI added. – With Janvic Mateo