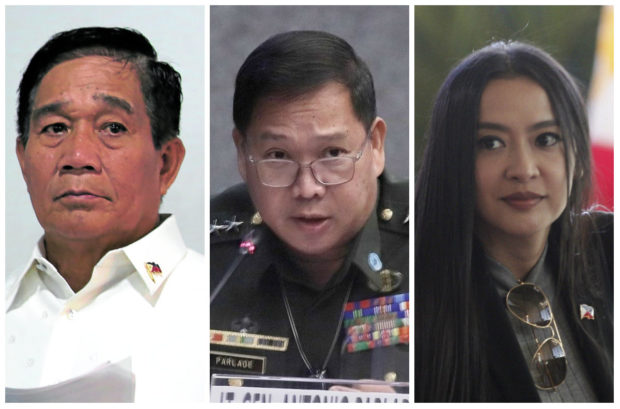 Overseas Workers Welfare Administration (OWWA) Undersecretary Mocha Uson was also mentioned due to her Facebook posts suggesting a connection between the human rights organization and the Communist Party of the Philippines-New People’s Army-National Democratic Front (CPP-NPA).

In the 2005 case of Zarate vs Alvarez, Justice Marvic Leonen defined red-tagging as “the act of labelling, branding, naming and accusing individuals and/ or organizations of being left-leaning, subversives, communists or terrorists (used as) a strategy… by State agents, particularly law enforcement agencies and the military, against those perceived to be ‘threats’ or ‘enemies of the State’.”

According to Palabay, members of the organization “have in this context experienced relentless attacks from the following Respondents in the form of malicious red/terrorist-tagging or red-baiting, which consists of baseless and dangerous imputations of being a front organization of the Communist Party of the Philippines and the New People’s Army (CPP-NPA).”

Red-tagging, according to Palabay, is considered a violation of Republict Act No. 9851 or the “Philippine Act on Crimes Against International Humanitarian Law, Genocide, and Other Crimes Against Humanity.”

The officials were also accused of violation of Republic Act No. 3019 or the “Anti-Graft and Corrupt Practices Act.”

Under the Section 6h or RA 9851, “persecution against any identifiable group or collectivity on political, racial, national, ethnic, cultural, religious, gender or other grounds that are universally recognized as impermissible under international law,” is considered a crime against humanity.

The complaint detailed that on two separate occasions, Esperon “permitted the publication of several slanderous and offensive statements” of NTF-ELCAC against Karapatan.

Palabay said in a post published on NTF-ELCAC’s Facebook page last April 24, mentioned Karapatan Alliance Philippines in an incomplete list of “legal front” of the NPA. Another post on May 29 described the organization as a “CPP-led Open Human Rights Alliance.”

Meanwhile, Parlade called Karapatan a terrorist front organization. He also challenged the organization to condemn the terrorist killing. His statement was shared on the Civil Relations Service AFP’s Facebook page.

Badoy also released a statement against the organization over the ABS-CBN franchise renewal issue. In a Facebook post on May 12, she told Karapatan and other non-government organizations to “[keep] out of this issue, lest we allow them to drag us into their trap and swallow the narrative they force down our throats –tyranny.”

“This has to stop. Instead of denigrating and imperiling people for their lawful exercise of their constitutionally-guaranteed freedom of expression, the government should take note and address legitimate criticisms of its policies,” said Palabay.

“[R]espondent public officers should be held criminally and administratively liable for the aforementioned acts that malign, vilify and baselessly red-tag me and KARAPATAN along with its officers and members’ practices,” she added.#