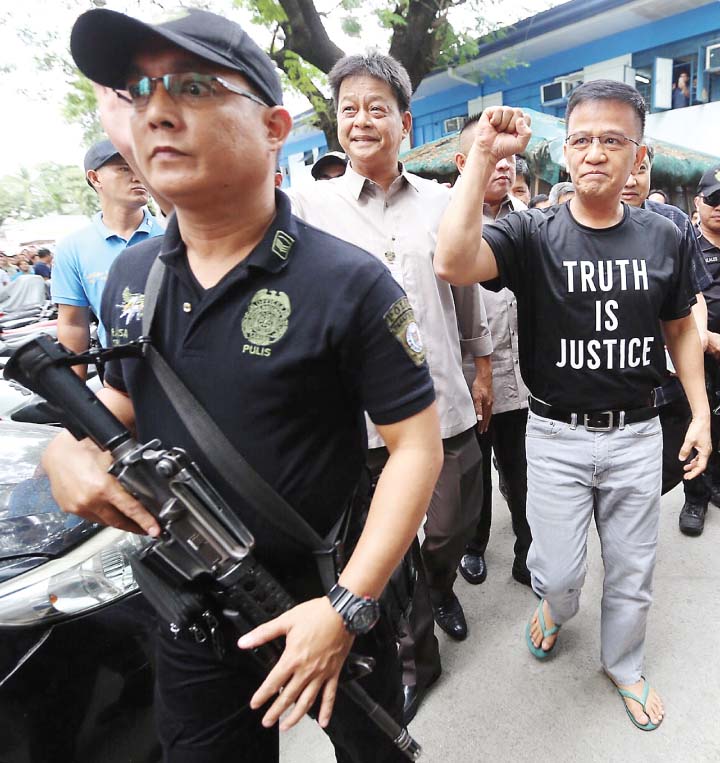 By Genalyn D. Kabiling and Chito A. Chavez

Former Customs Commissioner Nicanor E. Faeldon was transferred to the Pasay City Jail on orders of the Senate which had earlier cited him in contempt over his refusal to appear before its hearing of the P6.4-billion illegal drugs shipment from China.

He arrived at the jail facility clad in his statement black shirt, with “Truth is Justice” mark.

Although he was appointed last month by President Duterte as deputy administrator of the Office of Civil Defense (OCD), Malacañang said it is not inclined to intervene and secure Faeldon’s release from jail.

DEFIANT – Former Customs Commissioner Nicanor Faeldon (right) raises his right fist in defiance as he is escorted by the police to the Pasay City Jail Tuesday after he was cited in contempt by the Senate Blue Ribbon Committee. (Ali Vicoy)

Faeldon could still perform his duties related to OCD even though he is in jail, according to Presidential Spokesman Harry Roque.

“He is appointed to OCD, which is a policy-making body, so our position is he can perform his tasks wherever he may be, even in jail,” Roque said during a press conference in Marawi City.

Asked if the Palace would intervene in Faeldon’s case, Roque said: “We have never intervened in the legislative process. I don’t think the President will begin now.”

Faeldon has been transferred to the Pasay City jail after trading barbs with Senator Richard Gordon, chair of the Senate Blue Ribbon Committee probing the drug shipment and alleged corruption in the Bureau of Customs.

The former Customs chief has been detained at the Senate since September after he voluntarily surrendered to the Upper Chamber on contempt charges.

He was taken to the Pasay City Jail at 12:05 p.m. Tuesday, the Bureau of Jail Management and Penology (BJMP) said.

Senior Inspector Xavier Solda, BJMP spokesman, said Faeldon was immediately given a copy of the rules and regulations of the facility which was explained to him and his counsel.

Solda said the BJMP expects Faeldon to strictly adhere to the jail regulations, stressing that no special treatment will be accorded to him.

Even with his status, Faeldon will stay with the other 997 inmates at the Pasay City Jail which has an 830 percent congestion rate.

“For now, what is important is he arrived safely and we appreciate his cooperativeness,” Solda said.

Last Monday, Faeldon filed before the Supreme Court a petition seeking his release from detention.

But the SC did not take up his case during its full session Tuesday.

A source said Faeldon’s petition was not in the agenda of the SC’s full court session since his case has not been raffled for assignment to a justice-in-charge of the petition.

In his SC petition, Faeldon said that “the respondent’s [Senate] order of arrest and detention should be declared null and void as it was issued pursuant to a proceeding without any legislative purpose or even intent of legislation but purely for persecution, grandstanding, and self-confessed obsession.”

He pointed out that he was detained “without any chance for bail or any other form or mode of provisional or temporary liberty.”

“Stripped of the niceties, the petitioner is being detained, and has been detained for 134 days, and counting, on a non-bailable charge. Legislative contempt, however, and without fear of contradiction, is not and has never been classified as a heinous offense, much less a non-bailable offense,” he said.

“Thus, the assailed ‘no bail’ detention order is no doubt a cruel and inhuman punishment, which has long been outlawed under the 1987 Constitution,” he added.

He stressed that he was denied due process because he was not given a chance to explain why he should not be cited in contempt for not appearing in the hearings.

“Had the respondents first issued a show-cause order, the petitioner would have thoroughly explained to them the reasons why, it was and is his firm belief that he had a right to his personal dignity, to be informed of the nature and cause of the accusation against him, and that he is presumed innocent unless and until the contrary is proved,” he said.

Sen. Richard J. Gordon, chairman of the Senate Blue Ribbon Committee, said Faeldon’s continued detention a “self-inflicted wound that he himself can fix with a little humility and a little respect.”

Gordon said his committee would invite Faeldon, a former Marine captain, to appear in the next public hearing on Feb. 13.

Asked whether or not Faeldon would purge himself of the contempt charges slapped against him, Gordon replied: “I am not suggesting anything.”

“He will have to do it on his own. He has to show remorse and respect to the Senate,” he said. (With reports from Rey G. Panaligan and Mario B. Casayuran)