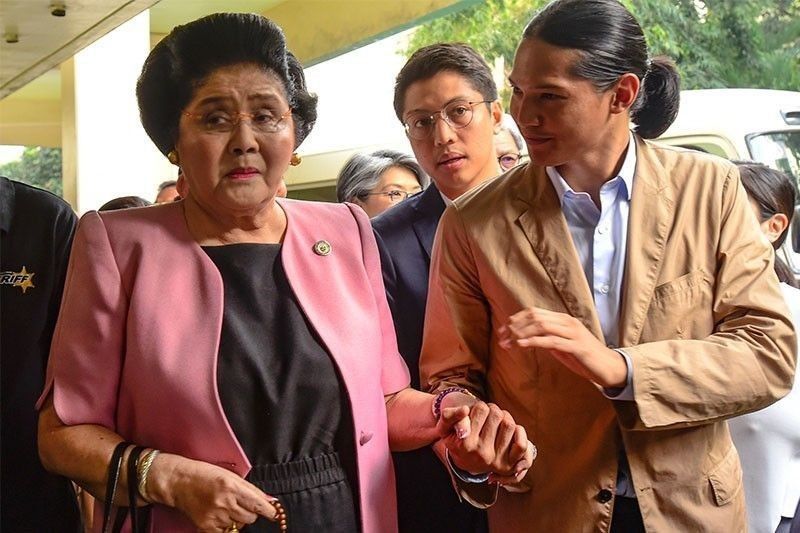 MANILA, Philippines — Three years since the Sandiganbayan’s guilty verdict on former Rep. Imelda Marcos (Ilocos Norte), a group of Martial Law victims appealed to Chief Justice Alexander Gesmundo to “affirm” the graft conviction of the wife of the late dictator.

Samahan ng Ex-Detainees Laban sa Detensyon at Aresto (SELDA) wrote to Gesmundo on Tuesday urging the chief justice to upheld the conviction of Marcos, noting that their inquiry on the appeal status in 2020 went without answer.

They were referring to Marcos’ appeal to the SC to reverse the anti-graft court’s fifth division conviction on three counts of violation of Anti-Graft and Corrupt Practices Act in connection with her alleged financial interest in a private local corporation during her government tenure.

The trial of this specific case already lasted for 17 years, until the ruling of the Sandiganbayan division on Nov. 9, 2018, but Marcos has yet to serve any prison time three years since.

Danilo Dela Fuente, SELDA vice chairperson, told Gesmundo: “Sir, we, the victims of the atrocities during Marcos’ martial law, have suffered enough. We continue to suffer as we witness Mrs. Marcos, the principal conspirator of the former dictator Ferdinand Marcos Sr. is still out of jail, living a profligate lifestyle, shamelessly luxuriating with the money she and her family stole from the Filipino people, despite this conviction by the Sandiganabayan.”

In a separate statement, Campaign against the Return of the Marcoses and Martial Law (CARMMA) also pointed out that pending the resolution of the appeal, Marcos remains free.

“In the meantime, we Filipinos continue to pay for the Marcos regume’s massive loans — loans for government projects which were embezzled and funneled to the Marcos’ own fraudulent Swiss foundations,” they added.

READ: ‘More than money, it is about memory’: Fight against dictatorship continues for some Marcos victims

SELDA, in its letter to the chief justice, also pointed out that Marcos son, Bongbong, is running for president in the 2022 polls, and suspicions were raised that funds for the campaign may be obtained from the nation’s coffers.

“In the interest of justice for all victims of human rights violations during the martial law period, we again appeal to this honorable Court to affirm Mrs. Imelda Marcos’ conviction by the Sandiganbayan,” they said.

“We call on the sense of truth and justice the members of this honorable Court and decide with dispatch to dismiss Mrs. Marcos’ appeal,” they added.

CARMMA also stressed that their reasons for protest and indignation against the Marcoses remain even with more than three decades since the historic ouster of the patriarch.

“We continue the call for justice – for all of us who suffered under the Marcos dictatorship that imprisoned, tortured, and killed thousands of Filipinos. Decades may have passed, but not the memory of the Marcos’ reign of terror, the wanton plunder of our nations’ coffers and the disregard for the voices of the people,” they said.

“Plundered money by the Marcoses should be returned to the people, instead of being held by this dynasty for their political rehabilitation and ambitions. They should be held accountable for their crimes. We should oppose all attempts of their return to Malacañang,” they added.