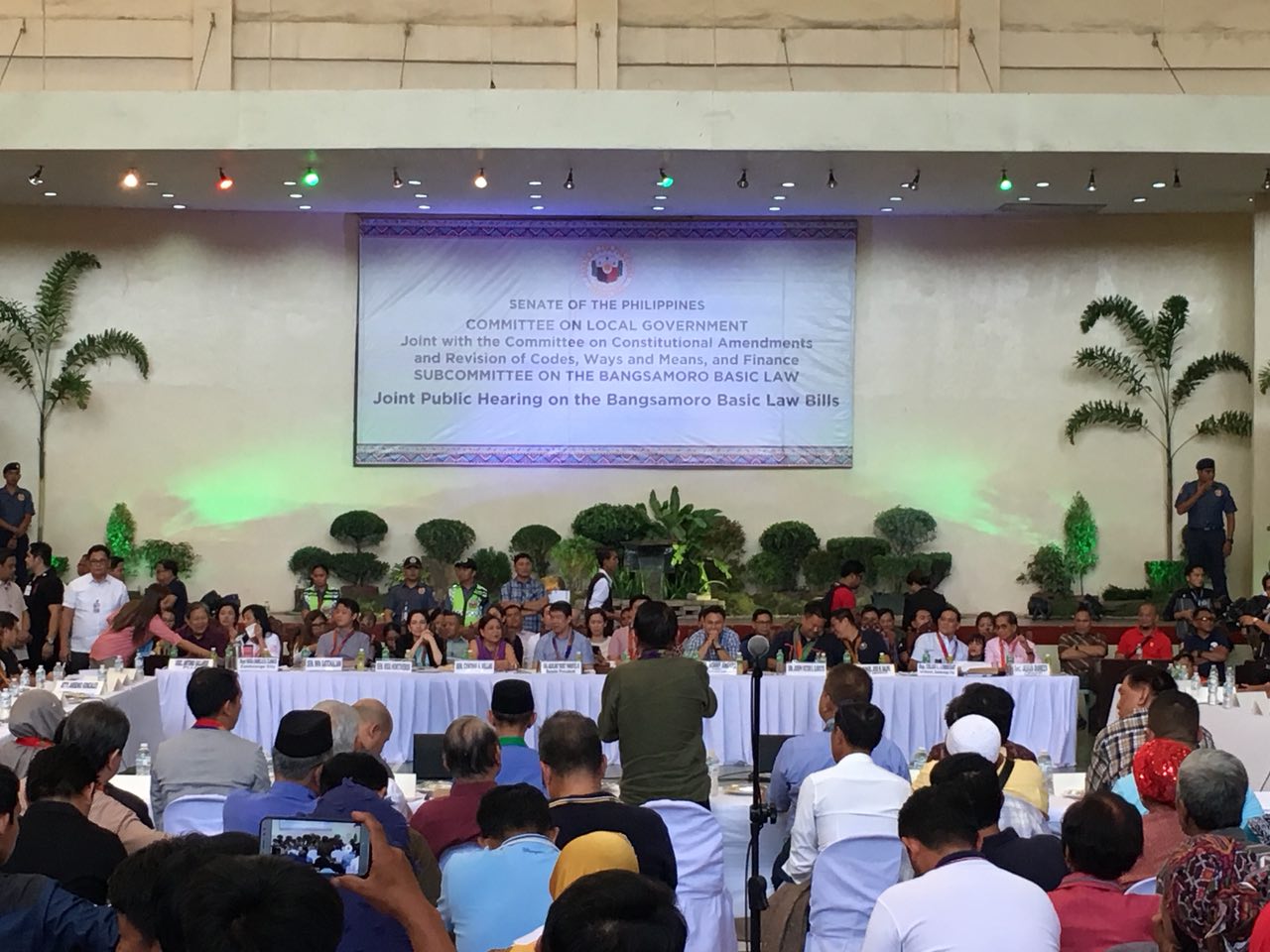 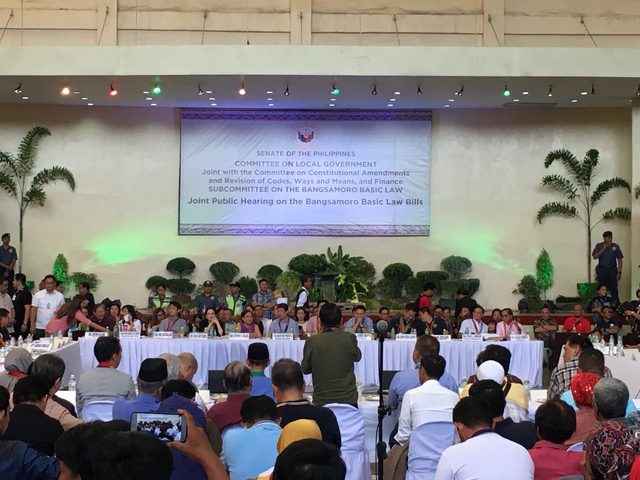 BBL TALKS. The Joint Public Hearing on the Bangsamoro Basic Law Bills in Zamboanga on February 9, 2018. Photo by Camille Elemia/Rappler

ZAMBOANGA CITY, Philippines – Despite assurances from senators and the Bangsamoro Transition Commission, officials of Zamboanga City still fear their city would be included in the proposed Bangsamoro region.

Senate local government committee chair Juan Edgardo Angara reiterated to the audience who attended the public hearing on proposed Bangsamoro Basic Law that Zamboanga would never be part of the new territory.

“While there is widespread acceptance, a lot of enthusiasm mula sa (from the) Basulta Peninsula, sa (in) Lanao. We realize here, there may be differences because of its history. Di na po kasama Zamboanga dun sa territories, ng Bangsamoro territories. (Zamboanga will not be part of the Bangsamoro territories.) That is the result because the BTC has been very sensitive to the sentiments of the the locals as a result of the very rigorous representation,” Angara said. His statement drew a loud applause from the audience.

Zamboanga City has overwhelmingly voted twice against its inclusion in the Autonomous Region in Muslim Mindanao.

Zamboanga City 1st district Representative Celso Lobregat lamented how certain provisions of the proposed Bangsamoro Basic Law drafted by the BTC could pave the way for the city’s inclusion.

“How many of you have read Senate Bill 1646? Hardly anybody has read it. Unfortunately if you read, if you study and if you analyze, there are many provisions that open the door for Zamboanga’s inclusion,” Lobregat said during a Senate consultative hearing on Friday, February 9.

Second District Representative Manuel Jose Dalipe called on Congress to approve a measure that would make everybody “feel comfortable.”

“If you want things to succeed, everybody should feel comfortable about it. Walang at the back of our mind, meron bang manlalamang later on? (No one should be thinking, will they take advantage of us later?) I would like to appeal to the Senate to pass a measure that will make everybody make comfortable, not doubting each other. Kasi ang bottomline (Because the bottomline is), instead of moving forward, we will move backward,” Dalipe said.

Fears over Zamboanga’s possible inclusion in the plebiscite remain because of the issue of “contiguity” in the proposed BBL – the same issue raised during the hearings in 2015.

City officials questioned anew the opt-in provision wherein “contiguous” areas or those areas sharing a common border with Bangsamoro can join the plebiscite through a petition by at least 10% of registered voters.

Senate President Aquilino Pimentel III, who filed a different version of the BBL, said the 10% threshold is “too low.” He said he would be pushing for 30% instead.

Climaco also said if there’s an opt-in provision, there should also be an opt-out one. Earlier, the former Sulu governor Abdusakur Tan and his allies pushed for such case, saying the people of Sulu should have the power to decide whether they still want to continue being part of the Bangsamoro region.

There was also confusion over the qualification of what contiguous areas are.

“The term contiguous relative to territory should be clearly clarified and properly defined without vagueness,” Climaco said.

They also called on Congress to review the provision on the proposed Bangsamoro Waters, which would give the new region exclusive jurisdiction over waters extending up to 22.224 kilometers or 12 nautical miles from the low-water mark of coasts that are part of the Bangsamoro territory. The jurisdiction of municipal waters within the 15-kilometer mark would remain under LGUs.

“The commercial fishing industry must have free acces to the deep-sea fishihng governed only by existing regulations of the ational government, not by the Bangsamoro,” Climaco said.

She added, Zamboanga, being the Sardine Capital of the Philippines, would be “greatly disturbed” by the expansion of waters of the Bangsamoro Territory.

“[It would affect] the lives of more than 30,000 industry workers. The expansion of the municipal waters for the Bangsamoro entity will deprive the fishing industry with their fishing grounds,” Climaco said.

Senator Juan Miguel Zubiri, chair fo the subcommittee on the BBL, said the Senate would approve the measure by end of March. The last hearing, he said, would be held in Manila on February 13. – Rappler.com